A literary treasure trove on the Sunset Strip 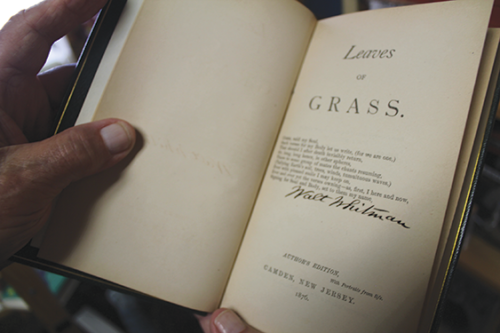 Mystery Pier Books is proud to have a first-edition copy of “Leaves of Grass,” signed by Walt Whitman. Find this and other treasures at the West Hollywood gem. (photo by Rebecca Moretti)

Tucked away in a narrow alley, only steps from famed rock ‘n’ roll landmarks like the Viper Room and the Whisky a Go Go, behind the smoky, fluorescent-lighted flurry of the Sunset Strip, lies a little green cottage. If this sounds like the beginning of some Tinseltown fairy tale, you’re not far off.

This fantastical cottage is Mystery Pier Books, founded in 1998 by father and son, Harvey and Louis Jason. The renowned bookshop is famous for its collection of first editions, some of the finest in the world.

To get there, one must walk down a narrow black-and-white tiled hall, sandwiched between a hookah bar and another bookstore. Turn right and you’ll emerge into an even narrower alleyway, at the end of which one will find the quaint wooden cottage. The painted porch teems with plants and vines, as alive and thriving as the literary masterpieces inside.

Turn the doorknob and step across the threshold. For a moment, one will have the wild impression of being alone in some charming alternate universe, full of colorful books in glass cases. From a back room emerges Harvey Jason, whose kind and old-worldly presence immediately makes one feel at ease.

“It was always a pipe dream of mine to have a really first-class, strictly first edition bookshop,” Jason said. Prior to opening the shop, the London native was an actor who starred in films such as “The Gumball Rally” and Steven Spielberg’s “The Lost World: Jurassic Park.”

Jason’s youngest son, Louis, was the inspiration for opening the store. Before opening Mystery Pier, he was selling books online and at book fairs, specializing in first edition mysteries – hence, Mystery Pier Books. Jason decided to open the shop with his son while shooting on the set of “Jurassic Park.” After a lifetime of acting, he was ready to turn his pipe dream into a reality.

“A year after the film wrapped, we started looking for a place. Louis and I saw this for-lease sign on the Sunset Strip. It was very unusual,” Jason said. At first, Jason was skeptical that the inconspicuous location could attract many – if any – customers.

“The realtor brought us back down this little passage. Besides an old fireplace, there was really nothing there. It was completely empty,” Jason said. The realtor offered them a 10-year lease with a fixed rent for the location.

“But we thought we could go broke in six months, so we turned it down,” Jason said. The rent has now skyrocketed, and Mystery Pier Books has been in business for over 20 years, catering to some of the biggest names in Hollywood, including regulars such as Johnny Depp and Flea of the Red Hot Chili Peppers. Tourists, passersby and stars alike have flocked to the store for years, often returning whenever they get a chance.

“We do get a lot of foot traffic, because of how well-publicized it is,” Jason said. The shop has been regularly featured on television, in national magazines and in a number of guides to L.A.

It is distinctive not only for its peculiar charm, but also for the quality and breadth of its first editions, which are meticulously preserved and beautifully displayed. From the first separate printings of Shakespeare’s plays to classic novels with personal notes from authors like J.D. Salinger and Ernest Hemingway, Mystery Pier Books has it all.

A signed copy of Einstein’s “Relativity” will run you $32,500. A signed first edition of Hemingway’s “Death in the Afternoon” is a relative steal at $5,750.

“With first editions in particular, the value is in the history,” Jason said. “You ask yourself, who touched this book? Whose book was this? It’s incredible to be able to own a book that was, say, in the personal library of Oscar Wilde.”

The shop also boasts an impressive collection of signed scripts, which are sold in beautiful leather cases specially made for Mystery Pier. These are often bought as gifts during awards season, along with pieces from the store’s popular “Books into Film” collection, which includes signed first editions of novels such as “Breakfast at Tiffany’s” and “2001: A Space Odyssey.”

“This is a city of investors. Books escalate in value much more rapidly than art. It’s remarkable how books have risen in price over the years,” Jason said. 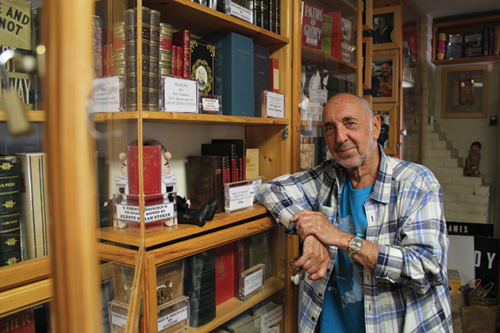 Although Jason doesn’t bring his own collection into the shop, one of his favorite pieces for sale is the first printing of Mendelssohn’s “Wedding March.” He takes pride in being able to connect customers with unique pieces like this that carry great historical and sentimental value.

“And then occasionally, rarely, but occasionally there will be seller’s remorse,” Jason said, referring to a first edition copy of a Dickens novel that survived a prison fire because it was bound in wood from the prison beams. “As soon as the customer walked out with it, we knew we would miss it.”

In terms of the future of print literature, Jason is optimistic, despite new technologies which have become prevalent with modern readers.

“Kindles and audiobooks are convenient, but at the end of the day there is nothing like a real book,” Jason said. “People who love books love books and will always keep buying them.”

Hoffman elected as president of LACCD Board of Trustees

I can’t WAIT to visit this store next time I’m in LA.