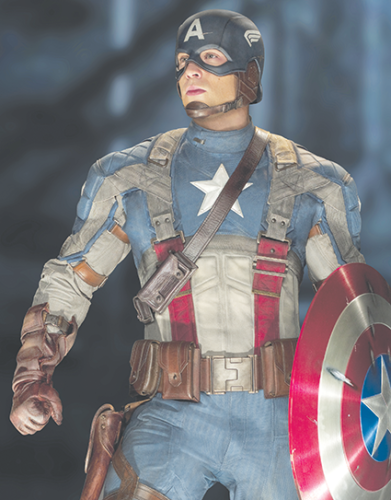 “Captain America: The First Avenger” has the right amount of patriotic and heartfelt sentiment perfect for the Fourth of July. (photo courtesy of Marvel Studios)

The Fourth of July is normally a wondrous time to commune with friends and family, eat a hotdog and kick back for the night’s spectacle, always remembering a key moment in American history.

Then 45 made it weird. Apparently, he wants the Fourth to be a D.C. extravaganza including tanks and VIP seating in front of Lincoln. And by the weekend, he’ll declare it a massive success, the most popular Fourth shindig in history, sicking dear Kellyanne on fake news CNN for challenging such a claim with estimates, photo evidence and all those pesky rational devices of persuasion.

In the spirit of this headache of a bigoted administration, we must turn to celluloid history for answers. While the GOP willingly ignores #MeToo concerns, somehow Hollywood earned at least the veneer of the high moral ground for once. So, let’s see if some patriotic classics (and some that should be) can speak to the 45th president’s time in office.

In Cap’s 1941 debut, he punches Hitler. Today, Captain America star Chris Evans enjoys social media takedowns of grand wizards and assorted bigots who just love 45. Evans is the real Cap, and his first mission has the right amount of patriotic and heartfelt wallop, while latter adventures reveal a hero whose patriotism is not bound by an administration but his own moral compass.

An idealist politician decides to resist Washington’s compromises by filibustering his way to victory. In 2013, Texas Senator Wendy Davis spoke for 11 hours against a bill that would restrict abortions in the state. The GOP cut it off prior to her 13-hour plan based on technicalities, which angered enough folks to shelve the bill.

Alan Moore’s 1982 graphic novel is a biting critique of Margaret Thatcher’s tenure as prime minister of England. The 2005 adaptation maintains the original locale but turns its ire on the Bush administration. A conservative news commentator, anti-immigration rhetoric, fear-mongering and a chilling takedown of homophobia. Wait, that all still applies now.

Otherwise known as that one film the drunk guy at the party loves for all the wrong reasons. A puppet flick by the creators of “South Park” about an American-based anti-terrorism agency, with all the crass and unsettling gags that go with the concept. Still, it does provide one of the most satiric pro-America songs in history. And the film’s central antagonist is Kim Jong-il, which should help us all remember that junior is hardly a step in the right direction, despite 45’s schmoozing.

Steven Spielberg’s breakout summer blockbuster is a true Fourth flick about families enjoying the beach for the holiday weekend. And while 45 might look like a California dude who spends too much time tanning at the beach, he’s really the monster of the story.

Action films don’t get dumber or more fun. But this presidency sure gets dumber every day. (Fine, they can’t all be clever. Just enjoy Will Smith saying, “Welcome to Earth.”)

Enjoy this fighter jet classic in which Tom Cruise enjoys “the need for speed.” America’s Air Force is certainly on parade in this flick.

A few years ago, Iowa Rep. Steve King had some choice words about non-white “contributions” throughout history.

“I’d ask you to go back through history and figure out, where are these contributions that have been made by these other categories of people that you’re talking about,” the obvious racist said. “Where did any other subgroup of people contribute more to civilization?”

Enter “Hidden Figures,” a harrowing tale about three black women who changed NASA. Anything that easily debunks a (somehow continually elected) politician who recently defended white supremacy needs to be blasting from every rooftop throughout the Hawkeye State.

Remember that time an alien lived illegally in Kansas, eventually growing up “to fight for truth, justice and the American way,” as he would describe his motivations?

He saved the world a bunch. He would be the guy celebrating every Fourth with glee until ICE escorted him to a detention center.

Publisher’s note: The comments and opinions expressed by the reviewer do not necessarily reflect the views or positions of the Park Labrea News and Beverly Press.