A glimpse at Hollywood’s Chinese-American history 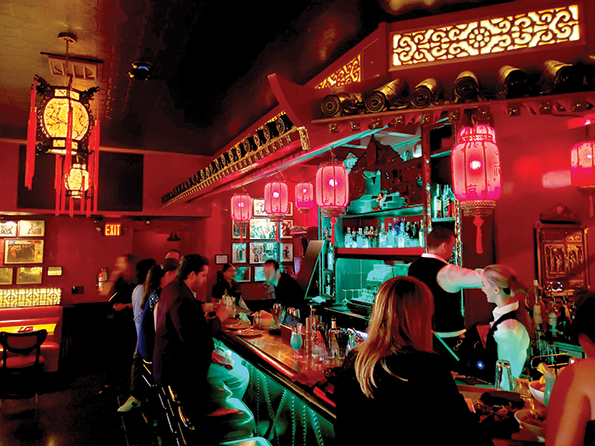 At the newly reopened Formosa Café, the Chinese-inspired interior is complemented by a collection of historical artifacts documenting the role of Chinese Americans in the film industry. (photo by Cameron Kiszla)

When the Formosa Café reopened last week, the new restaurant owners, the 1933 Group, brought back the Chinese décor and Asian food that made it a popular celebrity haunt for decades.

The operators refurbished the trademark red booths and trolley car to bring back the eatery’s classic feel, but they also fully enclosed a back area with a covered bar that was formerly open to the outdoors. The newly formed room was set aside for a specific purpose: to honor the history of Chinese Americans in Hollywood. 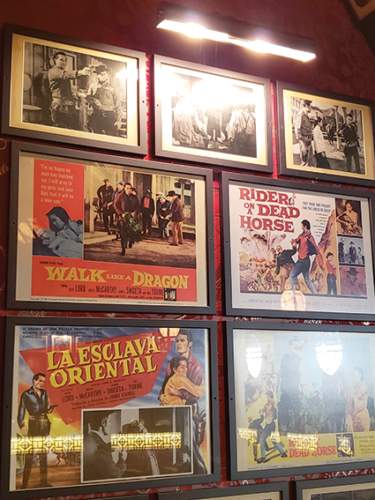 The restaurant’s owners – Bobby Green, Dimitri Komarov and Dima Liberman – started by installing the bar that was formerly in the historic Yee Mee Loo restaurant, a Chinatown staple until its closure in 1989. To go along with the new interior, Academy Award-nominated documentarian and historian Arthur Dong was tapped to decorate the space in a way that pays homage to the often under-appreciated role played by Asian Americans in Hollywood History, Komarov said.

“This place has had a ton of celebrities throughout the years, but there was no real dedication that was given to Asian Americans,” Komarov said.

Dong, who is also the author of the forthcoming book “Hollywood Chinese: The Chinese in American Feature Films,” which is due out in September, said it took some convincing to get him on board because he typically devotes his time to subjects like racism and stereotyping instead of interior design. However, once he signed on, Dong realized he could create something to make “my people” proud.

Dong said he has collected approximately 1,500 pieces of memorabilia and historical artifacts related to the careers of Asian Americans in show business, of which he chose approximately 150 headshots, movie posters and other items to be replicated to adorn the walls around the Yee Mee Loo bar and nearby booths and tables. Patrons can walk around the bar and learn about the successes and struggles of Chinese Americans in the burgeoning film industry, Dong said.

“I’m not denying and putting blinders on that there are problems in Hollywood about diversity and inclusion for people of color. I acknowledge that,” Dong said. “But this is celebratory, and that was the underlying theme here. If all you did was eat and leave, you’d see Asian faces … It tells you that we were here, that we were part of this industry and that we’re still part of this industry,” Dong said.

Komarov said he and his fellow owners are thrilled with the educational addition to an already historic venue.

“I think it came out better than we expected. We’re really, really pleased with the decor and how everything came together,” Komarov said.