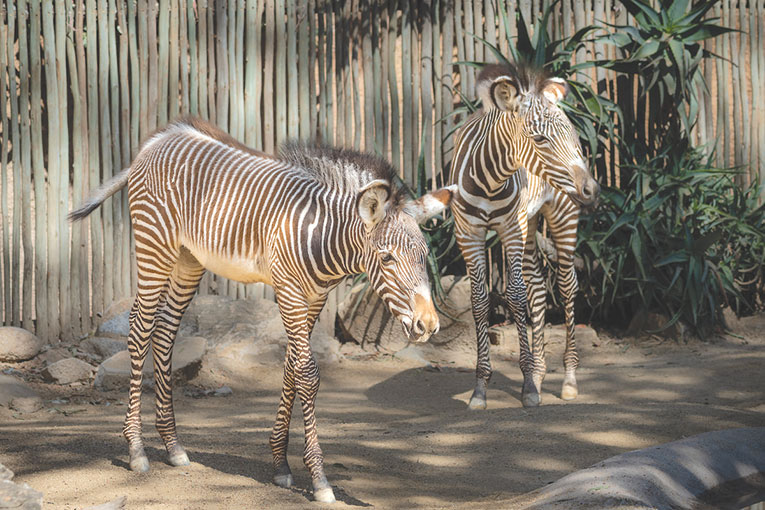 The Los Angeles Zoo’s new Grevy’s zebras are on display this summer. (photo by Jamie Pham)

On the heels of the first Grevy’s zebra foal birth since 1988 earlier this year, the Los Angeles Zoo welcomed a second healthy foal on April 24.

The unnamed, male foal was born to seven-year-old male Khalfani and five-year-old female Duni. Khalfani and Duni are part of a herd of zebras that came to the L.A. Zoo in 2016 through a species survival plan to help increase awareness of the Grevy’s zebra and the issues they are currently facing in the wild.

“For the past 30 years, Angelenos haven’t had the opportunity to see a zebra foal in person,” said Alisa Behar, curator of mammals at the Los Angeles Zoo. “But now, we have two at the same time, which is really exciting. We encourage guests to come out and see the boy and girl pair as they are exploring their new habitat with their mothers. We hope seeing these playful siblings will inspire guests to learn more about this beautiful animal and what people can do to help them in the wild.”

The newborn male was kept behind the scenes to bond with his mother and sister until his debut on June 20. A zebra foal’s relationship with its mother is extremely important. After a gestation period of 13 months, the foal is born and is walking on its own within 20 minutes. However, the mother will remain close to her offspring, walking around her newborn so it will memorize the black and white striped pattern on her body. This maternal instinct allows imprinting (the ability to recognize another animal as a parent and build habitual trust) to occur.

The L.A. Zoo has participated in the Association of Zoos and Aquariums Species Survival Plan program for Grevy’s zebra since the 1980s. The species of zebra is categorized as endangered by the International Union for Conservation of Nature due to habitat destruction, reduced access to water and competition with livestock. The zoo accepted a breeding herd in 2016 to help with the conservation of this species.

Grevy’s zebras inhabit semi-arid and open scrub grasslands of southern Ethiopia and northern Kenya. Males are 5 feet tall at the shoulders and can weigh as much as 990 pounds, making them the largest species of zebra. Females are around 10% smaller in size.

Grevy’s zebras have larger heads, thick erect manes and short, tufted hair at the tip of their tails. They have the skinniest stripes of any zebra.

Zebras communicate with each other through a series of loud, yelping barks and long, drawn out grunts divided by shrill whistles. The lifespan of Grevy’s zebras in the wild is 18 years.

The Los Angeles Zoo is located at 5333 Zoo Drive. For information, visit lazoo.org.