Yes, no, maybe – what Netflix movies to watch

“Always Be My Maybe,” yes 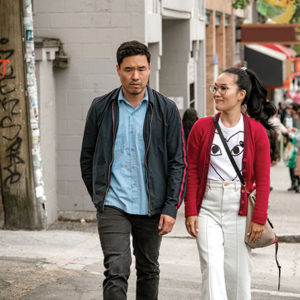 A writer, a producer and a star of ABC’s “Fresh Off the Boat” came together to create the romantic comedy “Always Be My Maybe.” (photo courtesy of Netflix)

Alumni of ABC’s “Fresh Off the Boat” know their way around that rom-com formula. The jokes don’t always land, but brisk pacing and clever sequences allow “Always Be My Maybe” to spin a cliché story into comfort food for a low-key night in.

Following the death of his mom, he felt obliged to stay in the same few blocks of San Francisco to care for his dear dad (James Saito). That sounds like a challenge for any romance. Of course, Sasha’s issues come to a head in her terrible romantic endeavors and vain demeanor.

Any film with Wong and Park in leading roles deserves some love. For too long, these charming stars populated supporting roles as best friends, humorous sidekicks, token diversity castings or all of the above. And once again, Netflix proves competent at using the rom-com to portray more diverse characters on screen (see “Set It Up,” “To All the Boys I’ve Loved Before”).

Cheers to first-time feature director Nahnatchka Khan, a “Fresh” producer whose only directing credits include a couple of those episodes and one for “Don’t Trust the B— in Apartment 23.”

Certainly, “Always Be My Maybe” is a formulaic film, and that might be a dealbreaker for some. Understandable. But for an inexpensive date night or merely something light to enjoy once the kids decide sleep trumps havoc, few films get chemistry right like this one. And the Keanu Reeves cameo is spectacular. 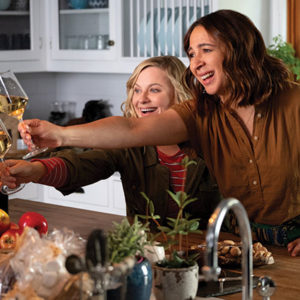 Amy Poehler in her directorial debut on the big screen (or whatever synonyms work for films on Netflix), what could go wrong? Even more, Poehler shares the screen with Rachel Dratch, Ana Gasteyer, Maya Rudolph, Tina Fey and a host of other familiar and incredible performers. All the parts are there, but not many laughs.

Loosely based on actual events, old friends get away for Rebecca’s (Dratch) 50th birthday. No topics are off limits (cue some racy banter), but the drama runs deep. Rather than sprinkle comedic moments in the middle of sincere ones, too many awkward or flat-out depressing sequences dominate the screen.

Dramatic comedy has its audience. Just ask any number of Golden Globe “comedy” series noms and winners that don’t bother cracking funny. “Wine Country” suffers from this plight, but it doesn’t have the layered performances or depth to, frankly, not be funny.

The story rightly centers around Dratch, whom deserves high praise for a career of notable characters on “SNL,” “30 Rock” and wherever else she pops up. But she’s too literal a Debbie Downer. As for the rest, “Wine Country” could have and should have provided them with more to do.

“Rim of the World,” maybe

Somehow director McG (still rocking that shorthand for his real name) found a way to make subpar films that don’t bomb as big. Peaking with “Terminator Salvation,” or maybe “Charlie’s Angels: Full Throttle,” he returned to his more successful career as a TV producer for a time before creating the Netflix film “The Babysitter,” which wasn’t terrible. “Rim of the World” is a step up, even if it’s derivative, a shameless copy masked as homage to “Stranger Things,” “The Goonies,” “Super 8” and 2011’s forgettable “Battle Los Angeles.”

At the Rim of the World summer camp in Big Bear, most kids only need to worry about ropes courses and using an outhouse. Too bad an alien invasion ups the prepubescent anxiety level, especially for young Alex (Jack Gore), ZhenZhen (Miya Cech), Dariush (Benjamin Flores Jr.) and Gabriel (Alessio Scalzotto). They miss the evacuation, and an astronaut from a downed escape pod tasks them with transporting a special data chip to the those who can end the invasion. Two problems. One, they’re in the mountains, 90 miles from their destination with only bikes to traverse many cities on fire. Two, they’re kids.

At points, the child acting is quite good. At others, this is a McG film that’s too comfortable with generic dialogue. Perhaps the largest problem surrounds the film’s intended audience. Not quite child friendly (way too much decapitation), not quite emotionally mature enough for adults, “Rim of the World” resides somewhere between. Still, audience-ambiguous films can make for fascinating rides that feel quite intense at times and then depict four 13-year-olds decked out in Adidas gear from an abandoned mall driving through the city to N.W.A’s “Straight Outta Compton.”