WeHo looks to become ‘City of the Future’ 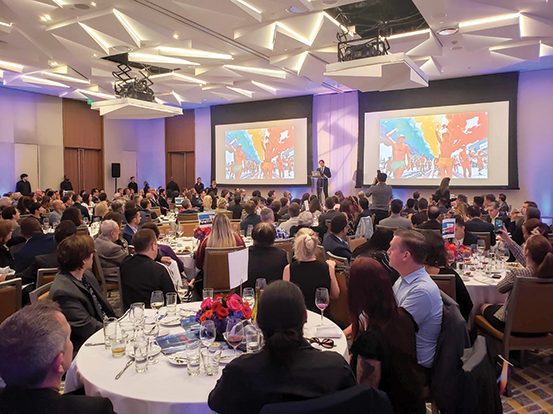 Mayor John D’Amico guided the audience through a brief history of West Hollywood during his 2019 State of the City address on June 19 at 1 Hotel West Hollywood. (photo by Cameron Kiszla)

At the 2019 West Hollywood State of the City event on June 19, city officials, chamber executives and a guest speaker discussed the local economy’s present and future.

The 10th annual event, which was hosted by the city and the West Hollywood Chamber of Commerce at 1 Hotel West Hollywood, focused on turning WeHo into a “City of the Future” while maintaining a human-centric approach.

The evening began with remarks from chamber President and CEO Genevieve Morrill and Nick Rimedio, chair of the chamber’s executive committee.

Rimedio set the tone for the evening by explaining to the hundreds people in attendance that West Hollywood’s future “is going to be built through the collective sequence of choices that we make today,” both small and large.

Morrill said the chamber is working with all types of businesses, including the cannabis businesses that have won permits from the city, but special attention is being paid to small businesses, which are the focus of a new chamber initiative.

“We’re seeking ways for small [mom and pop] stores in this economy of growing rents to be able to sustain themselves and open in our city so that we can keep our unique business community, our small business community,” Morrill said.

After the chamber speakers, Mayor John D’Amico and City Manager Paul Arevalo took the podium to address the local government side of the equation, which involves the use of technology to improve people’s lives.

Mayor John D’Amico took the crowd on a brief overview of the city’s history, adding pop-culture references to put the story of West Hollywood in context with the audience’s own personal experiences with technology companies, celebrities and art.

“[In] our popular teen years, the 2000s, suddenly the internet was everywhere, and the world started changing faster than we did. The towers fell, the music business changed … and we got John Duran,” D’Amico said.

D’Amico also highlighted some of West Hollywood’s uses of technology to improve traffic, communications and more.

“I’m excited for us and how we’ve managed to collar the beast and get technology to serve us and our residents and our businesses,” D’Amico said.

Arevalo offered a more detailed look at where some ongoing projects in the city stand presently and where the city wants to go in the future with its Smart City Strategic Plan.

For the city’s future goals to become reality, the city needs an infrastructure upgrade, Arevalo said, including a fiber link to connect city buildings and an improved public wireless network.

The upgrades are part of the city’s five-year plan and will help with everything from traffic and parking to emergency communications and economic development, Arevalo said.

“When we’re done with this, we want to make it a resource that’s available not only to residents, but to our business community,” he said.

Arevalo said the city provides data to technology companies so their applications and services can better assist West Hollywood residents in their day-to-day lives, such as the Google Waze Connected Community Program, which aims to improve traffic and road safety by notifying the public about road closures, construction impacts and more.

Hand, a consultant who helped West Hollywood put together the Smart City plan, advised the audience that the “City of the Future” will also have to deal with downsides of technological advancements, whether that’s a disruption to an established industry – like Uber for taxis or Airbnb for hotels – or a new system that feels like something out of the dystopian near-future of TV’s “Black Mirror.”

Whatever happens, Hand said, the focus must remain on people, not “the latest and greatest shiny object.”

“Being a smart city is not an end state. You don’t get an award at the end of the day. But it’s a process of redefining how we live and work and play as enabled by that technology,” Hand said.