Turning today into the ‘Glory Days’ 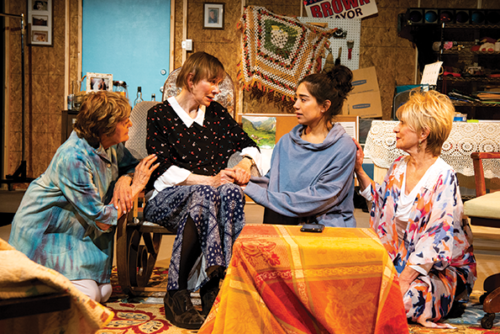 Laura James, Lisa Richards, Gladys Bautista and Judith Scarpone star in “Herland,” a coming-of-age story about women young and old, which runs through June 23 at the Greenway Court Theatre. (photo by Philicia Endelman/courtesy of the Greenway Arts Alliance)

In Grace McLeod’s “Herland,” playing through June 23 at the Greenway Court Theatre, the music of Bruce Springsteen pops up often in dialogue, during scene changes and even in a dream-like dance sequence.

While much of the discussion of the Boss and his music centers on its effect on the characters ­– the two-hour production is set in a garage that was formerly the rehearsal space for a Springsteen cover band – “Herland” explores many of the same themes. Songs on the album “Born in the U.S.A.” looked at the changing culture of the 1980s and the dangers of nostalgia, and “Herland” does the same for the 2010s.

In the Tiffany Moon-directed show, three lifelong friends ­– Jean (Lisa Blake Richards), Louise (Judith Scarpone) and Terry (Laura James) – face the realities of growing older without a man in their lives and reminisce about the way things used to be, when they acquiesced to the requests of men while ignoring their own wants.

That is, until Jean hires teenaged Natalie (Gladys Bautista) as an intern to help the women create a utopia for their retirement. While Natalie teaches the women about technology and shines a modern perspective on the indignities of the less-progressive past, the three older women help the teenager come to terms with her sexuality and provide a nurturing family unit where she can safely explore her boundaries as she transitions to college life.

All of the actors give strong performances, and each character gets a chance to shine on stage and delve deeply into their struggles with self-acceptance and self-reliance, with James and Bautista in particular lighting up the theater during their scenes together.

The show, which is enjoying a rolling world premiere with performances in San Diego and Chicago as well, is perfectly suited for Greenway’s space. The actors are mere feet from the audience during some of the most gripping scenes, and they use the proximity to their full advantage, allowing for subtle, yet powerful performances.

The closeness also allows for some playful interaction between cast and crowd, and inspired uses of light and sound help the audience feel as if they’re in Jean’s garage with the characters, creating a show that’s not to be missed.

Performances of “Herland” are held on Fridays and Saturdays at 8 p.m. and on Sundays at 4 p.m., with the exception of the matinee performance the weekend of June 15-16. That show will be at 3 p.m. Saturday, June 15, instead of the regularly scheduled matinee on Sunday, June 16.

The Greenway Court Theatre is located at 544 N. Fairfax Ave. For tickets and information, visit greenwaycourttheatre.org/herland, or call (323)673-0544.

Editor’s note: This article was updated at 1:33 p.m. on June 6. The actor who plays the role of Terry was misidentified as Samantha June. Terry is played by Laura James.

Hit the trail in L.A. County