A new 42-story mixed-use project from developer Walter N. Marks Inc. aims to replace the Staples at 5407 Wilshire Blvd. with 371 apartments, and the Wilshire Beauty store next door with a local restaurant. 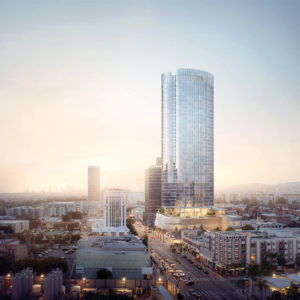 The family of developer Walter N. Marks is planning to build a 42-story apartment building at 5407 Wilshire Blvd. (photo courtesy of Richard Keating)

Walter N. Marks III, the company’s president, said the 475,000-square-foot building will contain 56 affordable housing units, but the other 315 units will likely be luxury apartments.

Marks declined to say how much he expects it will cost to erect the “first-class building” –  which is expected to include many amenities such as a bowling alley, virtual reality room, golf simulator and a fifth-floor park designed by Mia Lehrer, founder of Los Angeles-based Studio-MLA – though he said his family is “lucky” to have owned the underlying property since 1968.

“It’s an expensive building, and it’s going to be priced accordingly for us to make a return on the investment,” he said.

Residents will also have access to a mechanical parking system that can store up to 450 cars and has the ability to charge electrical vehicles each night. Marks said his company installed a 200-car system at Helms Bakery as a test, and it’s been a “great success” that will allow the Wilshire Boulevard building to be ready for the future expansion of the electric car market.

One of the biggest draws for potential tenants is likely to be the location, just a few blocks from the future Metro subway station at Wilshire Boulevard and La Brea Avenue that’s currently under construction as part of the Purple Line Extension. Marks anticipates the extended subway line and his building will be completed around the same time. The Purple Line Extension is expected to open in 2023. Marks said the building, which he estimates will take about three years to build, should open in early 2024.

When completed, the Art Deco-influenced tower will be the tallest building on the block, though Marks said it might not stay that way for long.

“I believe that the eastern half of the Miracle Mile should potentially have a lot of other high-rise apartments in the future. It’s zoned for it, and I’m really smitten on the Purple Line … and how it’s going to change this section of Los Angeles,” Marks said.

Richard Keating, the project’s architect, also said he’s expecting more tall residential buildings – perhaps even where a subway construction yard is now – because of the proximity to public transit and the 360-degree views of downtown to the Pacific Ocean from tall buildings in the Miracle Mile.

“I think a building like this is an important addition to our city,” Keating said.

“We are cognizant that this part of the city is the heart of Art Deco building in Los Angeles,” Keating said.

That’s also why the project will preserve the adjacent Art Deco building currently occupied by Wilshire Beauty. Marks said his company bought the building, which dates to 1936, from the beauty store’s owners, who will move out of the space when construction begins. The developers hope a local restaurant can move into the historic building.

“[The Wilshire Beauty building] is a very small space, but we think it’s a great building with a unique purpose. We want to restore it to its 1930s glory,” Marks said.

Marks said he hasn’t heard any feedback so far, but some Miracle Mile residents are beginning to sound off on the project.

Bonnie Garvin, a Miracle Mile resident, said she wishes the building would be for middle- to low-income people, not luxury apartments. Garvin also expressed doubts that developers actually build the affordable units they claim they will in order for their projects to be approved.

“I am encouraged by a number of the ideas presented by the developer,” Ryu said. “I look forward to exploring this proposal further with the community.”

In a Facebook post, the Mid City West Community Council said it has not yet taken a position on the project. Ken Hixon, senior vice president of the Miracle Mile Residential Association, said his group is supportive.

The project is expected to be submitted to the city within the next month.

Turning today into the ‘Glory Days’