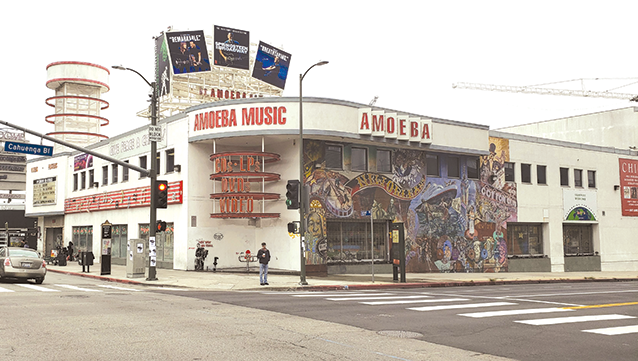 A 26-story, mixed-use project planned for the current site of Amoeba Music was approved by the Los Angeles City Council on June 25. (photo by Cameron Kiszla)

The Amoeba Music building at 6400 Sunset Blvd. will likely be torn down after the Los Angeles City Council approved a 26-story mixed use building for the site in a 12-0 vote on June 25. Councilmen Paul Krekorian, 2nd District; Jose Huizar, 14th District; and Joe Buscaino, 15th District, were absent.

The project, which stretches along Sunset Boulevard from Cahuenga Boulevard to Ivar Avenue, is being developed by Los Angeles-based GPI Companies, which did not return requests for comment. 6400 Sunset, LLC, which shares a phone number and address with GPI, bought the property from Amoeba Music in 2015 for $34 million, though the record store remains open at the site.

According to city documents, GPI plans to build up to 200 residential units, of which at least 10 will be for very low-income households, along with 7,000 square feet of commercial space on the ground floor. The approved size of the building is approximately 232,000 square feet.

Jim Henderson, Amoeba’s co-owner, said the record store will relocate sometime within the next year, before the lease ends. Amoeba has been at the corner of Cahuenga and Sunset boulevards since 2001.

Amoeba is looking for other locations in Hollywood, Henderson said, and in the meantime, the record store will remain open. Even after the move, not much will change for Amoeba except for the setting, Henderson said.

“Amoeba is about who we are, not where we are,” he added.

The record store has also reportedly been exploring the idea of opening a marijuana retail shop at its new location, similar to the Hi-Fidelity Cannabis Dispensary that Amoeba opened next door to its Berkeley location last year. Henderson declined to comment on any potential cannabis business. 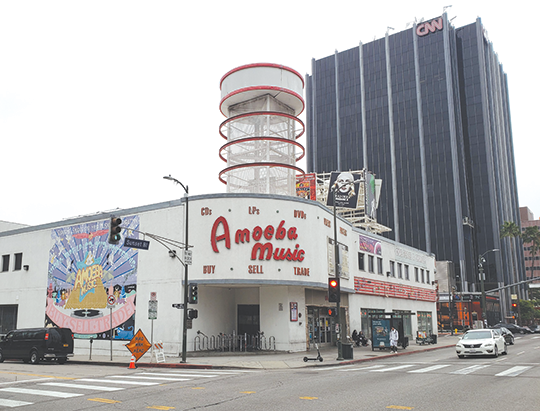 The Amoeba Music store at Sunset and Cahuenga boulevards is one of the last stores of its kind. The owners plan to find a new location once the new project begins at the site. (photo by Cameron Kiszla)

Miki Jackson, an advocate who works with Coalition to Preserve LA, which opposed the project, said she’s upset Hollywood will be losing more of its music industry history, including the large murals on the store’s walls.

“It’s not just a store, they have performances. There are many people who go regularly to enjoy the atmosphere, to socialize with people who are like-minded. It’s really a cultural center,” Jackson said.

Jackson was also upset the project only listed 5% of units as affordable.

“It’s a ludicrous number,” she said.

WeHo looks to become ‘City of the Future’