On June 17, the Tom Bergin’s Irish pub building was given historic-cultural monument status by the Los Angeles City Council, which voted 14-0 to declare the structure a landmark. Councilman Jose Huizar, 14th District, was absent. 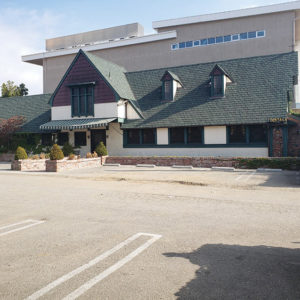 The Tom Bergin’s Irish pub building on Fairfax Avenue was declared a historic-cultural monument by the Los Angeles City Council on June 18, but the parking lot was excluded so housing might be built there. (photo by Cameron Kiszla)

Ken Hixon, senior vice president of the Miracle Mile Residential Association, said he’s “relieved” that the monthslong process is over and Bergin’s is safe.

“Bergin’s has always been a landmark in the hearts and minds of Los Angeles [residents] for generations, but now it’s official,” Hixon said.

Hixon estimated that approximately 1,200 people wrote, emailed, called and appeared in person to lobby on behalf of saving the 70-year-old building at 840 S. Fairfax Ave. The building’s road to landmark status was not an easy one, and the proposal to award the historic-cultural monument designation had to be given an extension after two delays in May when the matter was before the City Council’s Planning and Land Use Management Committee.

After a contentious June 11 meeting, Bergin’s finally cleared the PLUM committee, though the building’s parking lot was excluded from the historic-cultural monument designation so that housing might someday be built on it.

Bergin’s owner Derek Schreck said he plans to sell the property, which includes the protected building and developable parking lot, to someone who can use the property instead of letting it sit vacant, as it has since it closed after St. Patrick’s Day last year. Schreck said he’s looking for someone who knows the community and can help alleviate the housing crisis in Los Angeles while building a project that complements the Bergin’s building.

“[The council members] recognized there’s a responsibility to address some form of commemoration of what Bergin’s was, but also that this site [could help meet] the immediate needs of the Miracle Mile and Los Angeles in general,” Schreck said.

Hixon said the MMRA will “listen with an open mind” to any proposal from Schreck in regards to building housing.

As for what will become of the shuttered restaurant and bar, several speakers during the June 11 PLUM meeting said they were working to put together a group to reopen Bergin’s.

Hixon said if Bergin’s were to resume operations, all of the landmark designation’s supporters would be in attendance to celebrate, and they’re “hopeful and optimistic” a new restauranteur will emerge.

“That will be the best possible victory celebration,” Hixon said.

I am so happy that Bergin’s was declared a cultural historical monument. I feel with the right, experienced restaurant owner the business would flourish, esp. with the close by Screen Actors bldg., Petersen Museum, LACMA, & metro nearby. We need to value, cherish, & frequent our businesses with an historical & cultural heritage; this being an Irish establishment, which there are very few of in the Los Angeles area.