Thousands of people ‘just unite’ at the 49th annual Pride

Under the theme #JustUnite, thousands of people attended the 49th annual LA Pride festival and parade June 8-9 in West Hollywood. 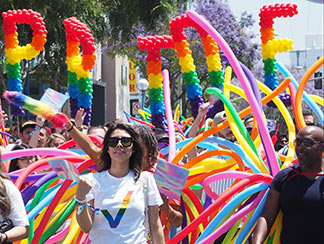 The celebration started Friday with a free ceremony and concert in West Hollywood Park headlined by Paula Abdul. Festival-goers flooded the park and San Vicente Boulevard Saturday and Sunday to see a musical lineup including Meghan Trainor, Ashanti and Years & Years.

“Pride has been something I’ve wanted to play for a long time,” said Saro, a recording artist who performed in the Pride festival for the first time.

It was the second time he had ever attended Pride. On the festival grounds in West Hollywood Park Friday morning, as a crew built the stage, he said he was “excited to just celebrate with my community and perform and just have a good time.”

The annual Pride events have become a joyous celebration with music, art and barhopping, but organizers also work to commemorate Pride’s roots in the fight for civil rights, and the battles that continue across the globe. The operators of a Tijuana-based homeless shelter for LGBT individuals joined Los Angeles City Councilman Mitch O’Farrell on a float during Sunday’s parade.

“Women, children, and members of our LGBT community who have fled persecution from their own countries are being victimized again while they seek asylum hoping for a better life in the United States,” said O’Farrell, 13th District, who visited social services groups in Tijuana four months ago. “The LGBT community in Tijuana lacks the kind of mainstream support from governmental organizations that we have in Los Angeles. Our sisters and brothers across the border need our assistance.”

Another free addition to this year’s schedule was Pride on the Boulevard, located on Santa Monica Boulevard between Robertson Boulevard and Hancock Avenue, which included local artists, DJs, beer gardens, and a health and wellness fair.

“It really is in response to growing crowds and people who are coming to West Hollywood to celebrate Pride,” said Jeff Consoletti, in his 10th year working on Pride after joining Christopher Street West as a volunteer in 2009. “We only had so much space the past few years when we were in our current footprint in West Hollywood Park and San Vicente Boulevard, so we worked hand-in-hand with the city of West Hollywood to expand to Santa Monica Boulevard.” 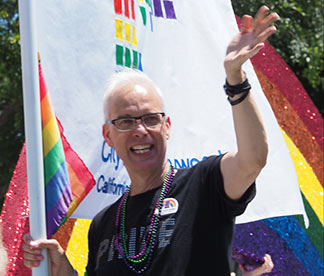 Organizers will analyze this year’s Pride to determine how to plan next year’s 50th anniversary celebration.

“It’s such an important landmark, 50 years of Pride in Los Angeles,” said Jake Brooks-Harris, in his first year on the Christopher Street West board. “Los Angeles has such an incredibly rich LGBTQ history, so we really want to make sure the 50th anniversary is reflective of that.”

This year, Pride honored the 50th anniversary of the Stonewall riots in New York City, which took place in response to a police raid targeting LGBT people at the Stonewall Inn.

Concession stands in West Hollywood Park paid homage to Stonewall and the Black Cat Tavern. Two years before Stonewall, demonstrators gathered at the Black Cat in Silver Lake to protest a police raid that had taken place shortly after midnight New Year’s Day. Fourteen of the Black Cat’s LGBT patrons were arrested and charged with assault and public lewdness. Both events spurred the decades of LGBT activism that followed.

“Current generations that are growing up now, and generations to come, will get to live in a world where there’s no doubt that a black man can be president, that a woman has the right to vote, that a person of Latino heritage can speak Spanish in their school without being punished and that same sex couples can get married,” said Estevan Montemayor, Christopher Street West board president. “And hopefully very soon, that transgender people have the full rights in our federal laws that they deserve. That is the world that we’re building.”