The guide to Pride in West Hollywood

The 2019 Christopher Street West LA Pride Celebration in West Hollywood is this weekend, and city officials are working to make transportation move as smoothly as possible. 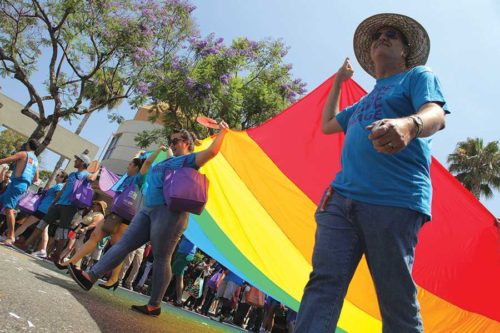 West Hollywood’s Pride celebration, pictured in a previous year, will bring thousands of residents and visitors to the city this weekend. (photo by Joshua Barash)

Thousands of visitors expected for the weekend’s events.

The free Dyke March will be held on Friday, June 7, from 6 to 8 p.m. at Sal Guarriello Veterans’ Memorial at Santa Monica Boulevard and Holloway Drive. The free Pride Opening Night Celebration will be held on June 7 from 6 p.m. to midnight at West Hollywood Park. Paula Abdul will perform a one-hour concert beginning at 10:30 p.m.

From noon to 1 a.m. on Saturday, June 8, and noon to 11 p.m. on Sunday, June 9, the Pride Festival at West Hollywood Park will feature acts like Meghan Trainor and Years & Years. Tickets are available at lapride.org.

From noon to 7 p.m. on June 8-9, the free Pride on the Boulevard event will feature performances by local artists, rides and attractions, beer gardens and more on Santa Monica Boulevard.

On Sunday, June 9, the Pride Parade, which begins at 10:45 a.m., will be led by grand marshals of the Los Angeles LGBT Center, activist Phill Wilson and actor and writer Ryan O’Connell.

City officials are encouraging the use of ride-sharing services and public transportation to reduce congestion. West Hollywood’s “Pride Ride” shuttles will take passengers to and from the Metro Red Line subway station at the intersection of Hollywood Boulevard and Highland Avenue, as well as other popular spots along Santa Monica Boulevard. For information, visit weho.org/prideride.

Perri Sloane Goodman, transit administrator for the city of West Hollywood, said public transportation is good for the environment and relatively inexpensive, plus attendees who don’t drive can celebrate without worrying about getting behind the wheel.

“[During Pride], streets become very impacted and traffic is heavy in the area. Be a part of the solution,” Goodman said.

Those lots have a combined total of 378 parking spots, and Vince Guarino, the city’s parking operations manager, said it’s difficult to predict how in-demand those spaces will be.

“Our annual Halloween Carnaval event and LA Pride in West Hollywood are our two busiest times for parking,” Guarino said.

The West Hollywood Sheriff’s Station will announce street re-openings on its Twitter account, @whdlasd. Some public areas and buildings will be closed as well.