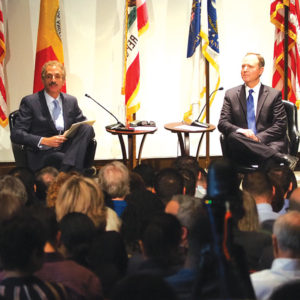 “Before we embark on something of this seriousness, I think the question is, ‘is this the right thing for the country?’” said Schiff (D-Burbank), chairman of the House Intelligence Committee, to a crowd of 400 in the Deaton Civic Auditorium at LAPD’s downtown headquarters. “I’m not there yet, although the president seems to be doing everything in his power to get me there.”

Mueller’s investigation into Russian interference in the 2016 U.S. election did not uncover any evidence that the Trump campaign colluded with Russia, but the long-anticipated report did not reach a conclusion on whether Trump obstructed the investigation.

“If we had confidence that the president clearly did not commit a crime we would have said so,” Mueller said, refuting claims from Trump and Attorney General William Barr that Mueller’s report exonerated the president.

House Speaker Nancy Pelosi and most House Democrats are still against impeachment, in part because of the lack of bipartisan support. Privately, Schiff said, a few Republicans have encouraged him to continue investigating ties between Trump and Russia.

“I’m frankly exhausted by the private misgivings,” he said. “People need to speak out.”

Republican Rep. Justin Amash, of Michigan, broke ranks and called for Trump’s impeachment, but the rest of the party has staunchly defended the president. In response to a television appearance by Rep. Jim Clyburn (D-S.C.), who said he thinks impeachment proceedings will begin at some point, a House GOP blog post criticized Democrats for leaning further in that direction.

“In recent weeks it’s become their entire agenda, and these comments from a member of Democratic leadership are further evidence that Speaker Pelosi can no longer prevent her caucus from proceeding down this senseless, partisan road,” the post read.

Asked by Feuer about the political ramifications of impeachment, Schiff said he’s “not a good enough prognosticator or political scientist to know which way this cuts politically.”

Citing decades of precedent from the Department of Justice’s Office of Legal Counsel, Mueller said he would not consider indicting a sitting president. His report did not offer any guidance on whether Congress should impeach.

“In fact, he wouldn’t even use the word,” Schiff said. “He said it is effectively left to Congress.”

Mueller has been content to let the report speak for itself, but many Democrats and their supporters want him to testify in front of Congress.

“He has, I think, one last service to provide for the country and that is to answer the questions of the Congress and the American people,” Schiff said.