Reward offered in robbery and murder on La Brea

The Los Angeles City Council has approved a $50,000 reward for information leading to the arrest and conviction of a male suspect who allegedly killed a man during a robbery on La Brea Avenue on March 16. 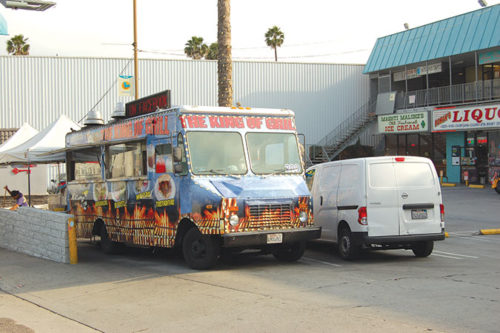 A victim who was murdered on March 16 had been waiting for food at a truck on La Brea Avenue, north of Sunset Boulevard. A suspect stole the victim’s phone and ran away, and when the victim caught him minutes later, the suspect struck the man multiple times, resulting in his death. (photo by Edwin Folven )

The council approved the reward on June 5 after Los Angeles Police Department detectives were unable to solve the case through an investigation. Authorities hope the reward will prompt someone to provide information.

The crime occurred at approximately 12:05 p.m. in the 1500 block of North La Brea Avenue, between Sunset Boulevard and Lanewood Avenue. The victim, Jarick Wayne Henderson, 31, was waiting at a food truck that regularly parks on the west side of La Brea Avenue when a male suspect stole his cell phone, said Lt. John Radtke, of the LAPD’s West Bureau Homicide Unit. Henderson chased the man and caught him a short distance away on La Brea Avenue. A fight ensued and Henderson fell to the ground, where the victim punched him repeatedly, Radtke added.

Witnesses called 911 after seeing Henderson on the ground. The victim experienced breathing problems and was taken by paramedics to a hospital where he died shortly after 2 p.m.

Patrol officers canvassed the surrounding area but were unable to locate the suspect, who was last seen heading south on La Brea Avenue. The Los Angeles County coroner’s office handled the initial investigation and in April ruled it a homicide, with the cause of death being blunt force trauma. Radtke said coroner’s office officials deferred making a final determination on the cause of death pending toxicology tests. Detectives with the West Bureau Homicide Unit began investigating the case in late April.

“We think he was just waiting to have food at the taco truck and set his phone down,” Radtke added. “It took a little while for it to be determined a homicide. We don’t have any leads and need help from the community. Hopefully with the reward, someone will call.”

Henderson was a Los Angeles resident who Radtke said lived in the general area where the murder occurred. The suspect was described as black, 20 to 30 years old and approximately 5 feet 10 inches tall. He was wearing a red hooded sweatshirt and multicolored pants. Radtke said authorities are uncertain whether the suspect is a transient.

“Public safety is my number one priority,” Ryu said. “I introduced this motion to support the LAPD detectives in solving this case and holding the perpetrators accountable. What happened to Mr. Henderson was an act of needless violence and we cannot let those who perpetrate such awful crimes escape justice.”

Anyone with information is asked to call investigators with the LAPD’s West Bureau Homicide Unit at (213)382-9470. During weekends and off-hours, call the LAPD’s 24-hour hotline at (877)LAPD247.