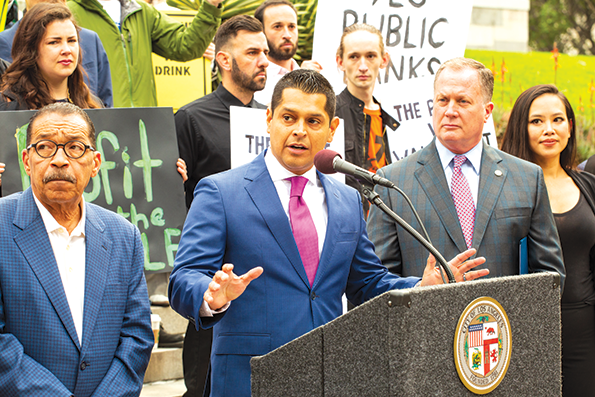 The Public Banking Act, AB 857, passed its first hurdle in the California Senate on June 19. The measure passed through the Senate Banking Committee and now heads to the Senate Governance and Finance Committee.

Assemblyman Miguel Santiago (D-Los Angeles) said AB 857 has the broad support from labor unions, environmental groups, grassroots activists and municipalities throughout the state, though it’s up against heavy opposition from Wall Street banks.

“Wall Street bankers hate the idea of a public bank because it takes power away from them and gives it back to the people,” Santiago said. “AB 857 gives us the option to invest public dollars for the public good, and I say it’s high time we prioritized the people of California over the profits of billionaire investors.”

Assemblyman David Chiu (D-San Francisco) said the state is “standing up to say the public’s money should be used for the public good.”

“Today’s vote is a huge step towards creating public banks in California and reinvesting our money in our local communities. Thank you to our Senate colleagues and our coalition for moving this policy forward,” Chiu said.

For municipalities in California, banking with Wall Street means their local revenues are used to bolster industries – like Big Oil and the NRA – that run contrary to many of the state’s deeply-held values. A public banking option would allow those local governments to invest instead in infrastructure projects, environmental justice initiatives, low-interest home and student loans, and other projects that benefit their communities.

“We thank the Senate Banking Committee for standing with millions across the state representing organized labor, environmental, community groups and local governments united behind the Public Banking Act and the solution it provides to the common harms of private banking,” said Trinity Tran, founding member of the California Public Banking Alliance.

Reconfiguration plans in Beverly Hills move forward through the summer