Police are asking for help in locating a female hit-and-run suspect who allegedly struck a male victim on May 19 in Hollywood, leaving him severely injured. 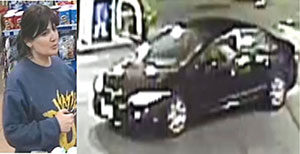 Surveillance camera images were released of a driver and her vehicle that allegedly struck and injured a pedestrian near Hollywood Boulevard and Vermont Avenue on May 19. (photo courtesy of the LAPD)

The collision occurred at approximately 11:25 p.m. on Hollywood Boulevard, just east of Vermont Avenue. Paramedics were called and took the victim to a hospital. The unidentified man sustained a broken leg, bruised ribs and will require knee surgery, said Det. Moses Castillo.

The collision occurred in front of a gas station at the southeast corner of Hollywood Boulevard and Vermont Avenue. Through their investigation, detectives determined the driver entered a mini mart at the gas station and asked a clerk what time they stopped selling alcohol. The driver then left without making a purchase, got back in her car and drove away.

Security cameras captured footage of the suspect inside the mini mart and the vehicle as she drove out of the parking lot, Castillo added.

“You never saw brake lights,” he added. “She just drove away and never tried to stop.”

Police released an image of the alleged suspect in the mini mart and a photograph of a dark blue Honda Accord she was driving. The suspect was described as white, over 30 years old, approximately 5 feet 2 inches to 5 feet 4 inches tall and 130 to 140 pounds. She has dark hair and brown eyes.

A $25,000 reward is available for information that leads to the arrest and conviction of the suspect. Anyone with information is urged to call Det. Moses Castillo at (213)833-3713. During weekends and off-hours, call the LAPD’s hotline at (877)LAPD247.