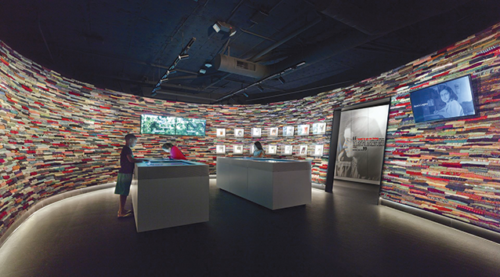 The Simon Wiesenthal Center’s Museum of Tolerance is celebrating what would have been Anne Frank’s 90th birthday earlier this month with an exhibit and play devoted to the young Holocaust victim.

The Anne Frank exhibit, narrated by Academy Award-nominated actress and singer Hailee Steinfeld, uses interactive environments and multimedia presentations to bring Frank to life. Exhibit highlights include a replica of Anne’s diary – the basis for Frank’s “The Diary of a Young Girl” – and a 360-degree cinema experience of Frank’s life that is accessed through a secret bookcase passage.

The play, “Anne, a New Play,” is adapted for American audiences from the Dutch original by playwrights Jessica Durlacher and Leon de Winter. Produced by five-time Tony award nominee Suzi Dietz, “Anne” has the 13-year-old Frank imagine her life as a young woman – safe in a post-war world. When she meets a publisher who expresses interest in her story, Anne looks back on the two years she spent hidden away with her family during the Nazi regime.

This 75-minute-long production eschews traditional sets and costumes to place the audience and actors on the same dramatic plane as the characters – all real people under real circumstances – fighting for their lives, sanity and dreams of the future.

“These historical figures are our better angels,” said Nick Blaemire, who adapted the play for American audiences. “The play is about what we can all do for each other, and how we can live up to Anne’s story – to make sure that it never happens again.”

Tickets for the play are $40 for general admission, $25 for seniors, $20 for students and $100 for a family pack, which includes two adults and up to three children. Tickets for the exhibit, which is not included with general admission to the Museum of Tolerance, are $15.50 for adults, $13.50 for seniors and $11.50 for students. Discounted combination packages that include a ticket to “Anne, a New Play” and entrance to the museum’s Anne Frank exhibit are available.

The calligraphy is on the wall at LACMA