Academy Award-winning actor Alan Arkin received a star on the Hollywood Walk of Fame in a June 7 ceremony that jumped back and forth between laughs and heartfelt moments. 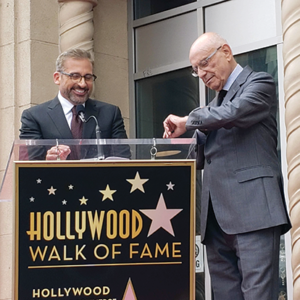 Arkin, who won a best supporting actor Academy Award in 2007 for his role in “Little Miss Sunshine” and has been nominated for three other acting Oscars, was honored in the motion pictures category with a star at 6914 Hollywood Blvd.

During the ceremony, Arkin was lauded by actor Steve Carell, who has starred with Arkin in three films, including “Little Miss Sunshine,” and Matthew Arkin, the honoree’s son.

In Carell’s speech – during which Arkin feigned disinterest by tapping his watch and encouraging his fellow Walk of Famer to wrap it up – Carell said Arkin’s acting “never begs for attention, but gets it anyway.”

“It is a true and genuine honor to be here today,” Carell said. “You are my idol, and this means the world to me to be here to celebrate you today, and I love you.”

Matthew Arkin read statements from Adam and Anthony Arkin, his siblings and fellow actors who were unable to attend the event because of work conflicts, and addressed the impact his father had in making show business the family business while also keeping his children grounded.

“I’m grateful that we grew up with a father who, both by word and deed, taught us … that true success is measured by the people in your life and the relationships you have with them,” Matthew Arkin said. “By that yardstick, Dad, you are a giant.”

“Dad, you’ve always been a star. It’s only right that you should have one,” he said.