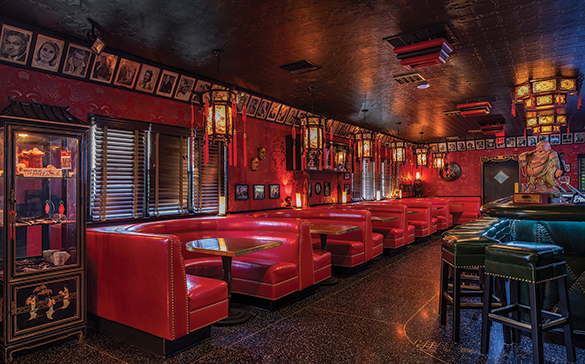 The Formosa’s red booths have always been one of the café’s most notable features. (photos by Maxim Shapovalov)

The Formosa Café, frequented over the years by actors, singers and mobsters during Hollywood’s Golden Age, will celebrate its grand reopening on June 28. The famed restaurant has been closed since December 2016.

“We are thrilled to have revived the Formosa Café – a remarkable and historic institution – and are honored to have been given the chance to make a piece of old Hollywood history new again,” said Bobby Green, co-owner and lead designer at the 1933 Group, the café’s new operator. “This has been the most exciting restoration because the Formosa is such a beloved, iconic celebrity favorite, and we hope it has a long-term impact on historic West Hollywood.”

There was some uncertainty about the fate of the building, located on Santa Monica Boulevard near La Brea Avenue, before 1933 Group secured a lease of the property in spring 2017 and vowed to renovate it. The company specializes in renovating and reopening historic venues including Highland Park Bowl, Idle Hour, Sassafras Saloon, Thirsty Crow and La Cuevita. It’s also undertaking a project to reopen Tail o’ the Pup, a once popular hotdog-shaped stand.

Several key details of Formosa’s origins have been lost to history. Its architect and builder are unknown, according to the city of West Hollywood’s historic preservation records. The construction date is estimated between 1920-29, and the restaurant has fought for its survival before. Actors Christopher Lloyd and John Cusack, who advocated for landmark designation when the cafe faced the threat of demolition in the early 1990s, were two of the Formosa’s contemporary regulars.

The interior was renovated in mid-2015, a little more than one year before the Formosa closed. 1933 Group worked with the grandson of former owner Lem Quon to decorate the new Formosa with the same autographed celebrity photos and other artifacts that used to be on display.

In decades past, when it was located near major studios, the Formosa’s long list of regulars included Elvis, John Wayne, Marilyn Monroe and Frank Sinatra. It has also made several memorable cameo appearances in “L.A. Confidential” and other movies and TV shows. 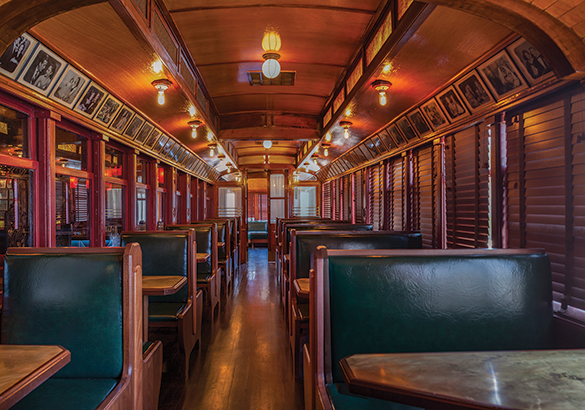 Some of the menu items pay homage to the venue’s past. On the drink menu, the Ghost of Sam Goldwyn (Zubrowka Bison Grass vodka, grapefruit, chareau aloe liqueur, raspberry syrup and Stolen Smoked Rum) honors the Sam Goldwyn Studio, which was located across the street from the Formosa in its heyday. The Johnny [Loves] Lana (Union mezcal, iichiko soju, matcha syrup, coconut, orange juice and kimino sparkling yuzu), harkens back to the unlikely romance between actress Lana Turner and L.A.-based mobster Johnny Stompanato, who was later stabbed to death by Turner’s daughter Cheryl.

In assembling the drink menu, 1933 Group worked with local historians to answer questions such as: “What kind of whiskey would Frank Sinatra have been served and can we source any old vintages?” and “What was John Wayne drinking that night he passed out in the bar?”

Asian-inspired dishes will be offered in keeping with the Formosa’s history. 1933 Group worked with Little Fatty chef and owner David Kuo to develop a menu true to the restaurant’s past.