A little more than a month after the death of one of the beloved bartenders at Musso & Frank Grill in Hollywood, the venerable restaurant lost another longtime employee. 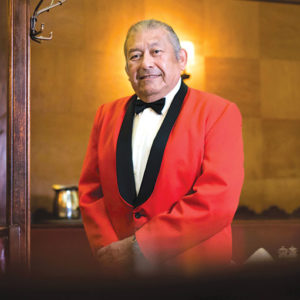 Sergio Gonzalez, a waiter who had worked at the Hollywood Boulevard restaurant since 1972, died on June 4 at age 66. The previous day, he attended a memorial ceremony for head bartender Ruben Rueda, who died on April 26 at age 67.

“Musso & Frank has lost another beloved family member with the passing of Sergio Gonzalez,” said Mark Echeverria, Musso & Frank Grill’s COO, CFO and a fourth-generation family member and owner. “He was a truly wonderful man who was loved and respected by everyone who had the privilege of knowing him. Kind, generous, warm, dignified, caring and thoughtful, he had a gift for treating everyone like a guest of honor, whether they were internationally famous celebrities.”

Gonzalez began working as a busboy at Musso & Frank Grill at the age of 19. The native of Veracruz, Mexico, was visiting his grandmother in Los Angeles and his uncle, who worked at the restaurant at that time, asked Gonzalez to fill in for a few days. Gonzalez accepted and remained an employee for decades. He was promoted to waiter after one year and earned the distinction of donning the signature red jacket worn by the service staff.

“For almost half of our 100 years, Sergio helped make Musso & Frank a home away from home for his valued patrons and colleagues alike, and we’re all heartbroken to bid farewell to this remarkable man,” Echeverria added. “My sincerest condolences to his cherished wife, daughter and grandchildren.”

Musso & Frank Grill became the first and only employer Gonzalez ever had. The restaurant’s publicist Dan Harary provided quotes from Gonzalez in which he referred to meeting some of Musso & Frank Grill’s high-profile regular customers.

“When I became a waiter, one of my first customers was this guy, he was a Jewish gangster Mickey Cohen. And I didn’t even know who the guy was,” Gonzalez said. “I used to put two hot towels on his knees. He was kind of crippled because I think he was beat up in jail. He used to come with two bodyguards, and he used to give me 10 bucks. Back then, it was a lot of money.”

Gonzalez was also well-known to many of the restaurant’s other famous customers, including members of the Rolling Stones. The band paid for Gonzalez fly to Mexico City in 2006 to see a live performance.

“Keith Richards’ assistant called me [and said], ‘You’re going to the concert, so get your passport, go to LAX,’” Gonzalez said. “I stayed with the band in the Four Seasons Hotel like a big shot.”

“I knew Sergio really well. I hugged him on the night of Ruben’s memorial,” LaBonge said. “Keith Richards of the Rolling Stones loves Musso and Frank but also loved Ruben and Sergio. Everybody loved Sergio.”

“When people ask me why I have stayed so long, my answer is that the bosses here are very nice,” Gonzalez added in a quote provided by Harary. “We have good customers, and we run the place.”

Gonzalez is survived by his wife Sandra, daughter Leslie and grandchildren Allesandra, Sergio and Victor. His son-in-law Alex has also been a server at the restaurant for the past 15 years.

Plans call for a memorial service to be held in the near future at Musso & Frank Grill.

Photographing power at the White House