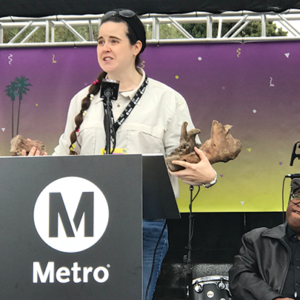 Paleontologist Ashley Leger displayed some of the fossils that have been found during subway excavation at the halfway point celebration for Phase 1 of the Purple Line Extension. Leger, of Cogstone Resource Management, oversees the removal of fossils during the project. (photo by Tom LaBonge)

The celebration at the La Brea Tar Pits and Museum marked a significant construction milestone for Phase 1 of the project between Koreatown and Beverly Hills. Officials thanked residents and businesses for their support. The free celebration included music and dance performances, games, giveaways, food trucks and businesses participating in Metro’s Eat, Shop, Play program, which promotes local companies during subway construction.

“Construction is never easy, but Metro is successfully building the Purple Line Extension through one of the most congested urban corridors in the entire country while keeping the hassle-factor pretty low for most people,” said Los Angeles County Supervisor and Metro Board Chair Sheila Kuehl, 3rd District. “Because of everyone’s support and patience, we’re on track to get the first leg of the subway open all the way to the front gates of Beverly Hills by 2023.”

Phase 1 of the project extends 3.92 miles from Western Avenue to La Cienega Boulevard and is anticipated to open in 2023. It will include subway stations at Wilshire/La Brea, Wilshire/Fairfax and Wilshire/La Cienega. Phase 2 will run 2.59 miles under Beverly Hills to Century City and will include new subway stations at Wilshire/Rodeo and Century City/Constellation. That portion of the project is expected to begin operations by 2025. Phase 3, which will extend 2.56 miles to West Los Angeles and include stations at Wilshire/Westwood and on the U.S. Department of Veterans Affairs property, is expected to open by 2026.

Metro broke ground on Phase 1 of the project in November 2014. Utility relocation work began in early 2015 and the following year, excavation began for the three underground stations. Crews have completed excavating the future Wilshire/La Brea and Wilshire/Fairfax station sites and are only 20 feet from reaching the bottom of the station site at Wilshire/La Cienega.

“The Purple Line Extension is integral to L.A.’s transportation future, and [this] milestone is proof of our extraordinary progress,” said Los Angeles Mayor Garcetti. “Once complete, riders will be able to take a world-class subway from the Westside to Downtown Los Angeles in just 25 minutes, easing congestion in our most gridlocked neighborhoods and giving people better access to everything Los Angeles has to offer in time for the 2028 Summer Olympics.”

Metro has implemented several initiatives to help mitigate the impacts of subway construction on local communities, including the Business Interruption Fund and Eat, Shop, Play.

When completed, the trip between downtown Los Angeles and the Westside will take approximately 25 minutes aboard the Purple Line Extension. The new subway line is expected to generate 49,300 daily weekday boardings. For information visit metro.net.