Update at 11:39 a.m. on June 25: A suspect has been arrested and charged. More information coming in Thursday’s paper.

LAPD Hollywood investigators are searching for a male suspect who allegedly stole a small statue of Marilyn Monroe on June 16 that was atop a decorative artwork/gazebo known as the “Four Ladies of Hollywood” near the corner of Hollywood Boulevard and La Brea Avenue. 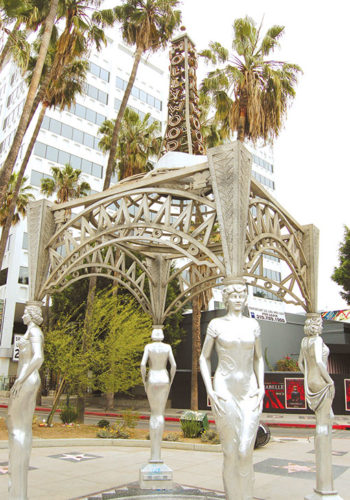 The missing Marilyn Monroe statue was perced atop the replica radio tower above the artwork/gazebo at Hollywood Boulevard and La Brea Avenue. (photo by Edwin Folven)

The gazebo was installed in 1994 at the southeast corner of the intersection. It has a decorative cover supported by statues of Mae West, Dorothy Dandridge, Anna May Wong and Dolores Del Rio, and topped by a replica of a radio tower with the Monroe statue. The piece is approximately 6 inches in height and depicts the actress in her iconic pose from “The Seven Year Itch.”

Det. Douglas Oldfield, of the Hollywood Division, said an unidentified individual called the station at approximately 11 p.m. on June 16 and said a man was attempting to steal one of the statues. Patrol officers were dispatched to the location but could not verify the report.

“They went by and saw the four statues and didn’t know about the little statue up there on top,” he added.

Approximately four hours later, an unidentified individual phoned NBC Channel 4 News and reported that the Monroe statue was missing. Staff from NBC then called police and an investigation into the theft began, Oldfield said.

“The issue we had is both of the calls were anonymous,” he said. “If anyone knows who they were or has any information, we would like to hear from them.”

Oldfield said the first caller identified the suspect as a white man, but no other details were available. Police technicians used a fire department ladder to reach the top and dust for fingerprints. The location where the Monroe statue was located is approximately 45 to 50 feet off the ground, Oldfield said.

Investigators have canvassed the surrounding area searching for security cameras that may have captured images of the theft. They are also awaiting fingerprint evidence to be analyzed. Authorities have made locating the statue and the thief a priority.

“Hollywood Di-vision takes seriously the theft of property belonging to the city of Los Angeles,” said Capt. Cory Palka, commanding officer of the Hollywood Divi-sion. “In this case, the property has significant value to our tourist community as well as our residents. We have detectives assigned to the case and they are following up on leads that will hopefully locate the thief and have the property returned to its rightful owner, the citizens and community of Hollywood.”

Ana Martinez, vice president of media relations for the Hollywood Chamber of Commerce, said the artwork was commissioned by the city of Los Angeles and the now defunct Community Redevelopment Agency, and is not part the Hollywood Walk of Fame.

“It is a travesty that people do not respect artwork and feel the need to steal and destroy items that were placed for visitors to enjoy,” she added. “Hopefully, there are cameras in that area that will catch the perpetrators.”

Oldfield said he had not heard of any similar thefts of statues and is uncertain why someone would steal the Monroe piece. He said the statue is made of stainless steel and will cost “several thousand dollars” to replace.

Man arrested for sexual assaults on Wilshire and Olympic corridors