The project will include the demolition and reconstruction of Loyola’s Xavier Center, a multi-use building used for holding mass, testing, special events and other functions. The project also includes a Veterans’ Wall of Honor paying tribute to the thousands of Loyola graduates who have served in the military, as well as enhancements to the Hayden Circle near the school’s entrance.

“It’s going to completely change the face of our campus,” said Lela Diaz, vice president for advancement for Loyola High School. “The students will be able to engage in this space in ways in which we can only imagine right now. We are really excited to see it come to life.”

School administrators held a recent groundbreaking ceremony for the project that included Loyola Board Chairman Rick Caruso, developer and owner of The Grove and many other retail and residential properties throughout Southern California. The project was made possible through donations to a $34 million capital campaign, of which $27 million has already been raised, Diaz said. Although she declined to provide donors’ names, she said 12 seven-figure gifts were made, primarily from the parents and grandparents of Loyola students and alumni. 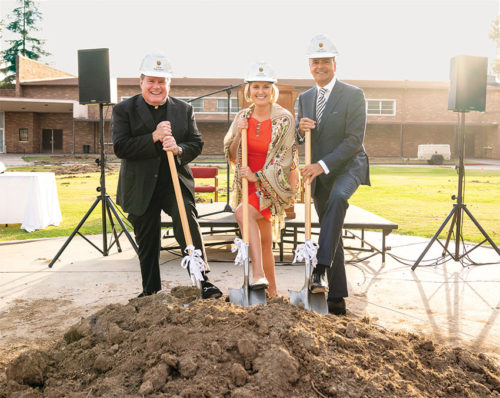 Father Gregory M. Goethals (left), president of Loyola High School of Los Angeles, was joined by the school’s Vice President for Advancement Lela Diaz and Loyola Board Chairman Rick Caruso at a groundbreaking celebration for a new project transforming the campus. (photo by Brandon Bibbins)

“Working alongside Loyola’s administration, sharing its vision for the 1901 Venice Blvd. project and helping to shepherd it in its continued path of excellence, Loyola’s board enthusiastically endorses this immensely important initiative,” Caruso said. “My family and I are honored to support this project and the wonderful legacy of a Loyola Jesuit Catholic education.”

“To inspire our students to become future leaders, we must be able to provide them with state-of-the-art facilities that contribute to a thriving educational and spiritual community. After years of thoughtful planning, forward-thinking design decisions and very generous support from our donors, the 21st century Xavier will become a reality,” Goethals said.

The original Xavier Center, named for St. Francis Xavier, was built in the mid-1960s and lacked enough space and flexibility to meet the school’s current needs, Diaz said. The new facility will have 26,000 square feet of space that will be used for approximately 200 functions annually. It will include movable walls that can be positioned so separate events can be held simultaneously, and technologically advanced communications and audio-visual systems. It will also include a new liturgical space and sacristy for masses. A banquet kitchen capable of serving 800 guests will be added, as well as a new food service kitchen for students.

The project will also alter the school’s façade on Venice Boulevard with a new front entrance gate that will enhance security. The Hayden Circle will be redesigned and landscaped to showcase Loyola’s core values for students. The Veterans’ Wall of Honor will be located next to the Xavier Center.

Loyola High School of Los Angeles serves nearly 1,250 young men. The new project, which is expected to be complete in fall 2020, will enable the school to continue its tradition of providing an academically rigorous, college preparatory education founded on Jesuit principles.