U.S. Rep. Ted Lieu will introduce a bill later this month that imposes a nationwide ban on conversion therapy, a controversial and debunked practice of changing an LGBT individual’s sexuality to heterosexual. 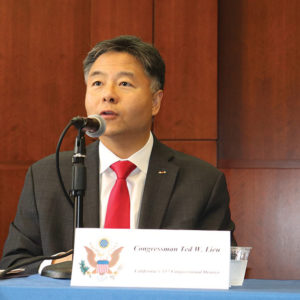 Lieu is introducing a bill to ban conversion therapy for the third time since he’s been in Congress. It’s the first time with Democrats holding the majority. (photo courtesy of U.S. Rep. Ted Lieu’s office)

“My view of politics is that everything seems impossible until it happens,” said Lieu (D-Torrance), at a panel discussion at UCLA on June 6. “So 15 years ago if I would tell you ‘Hey, 15 years from now we’re going to have gay marriage in 50 states and a bunch of those states will be smoking weed,’ you’d think I was crazy.”

Conversion therapy is illegal in about two-fifths of U.S. states, including California. Under the joyful backdrop of Pride celebrations throughout Los Angeles, including West Hollywood over the weekend, the push for federal legislation underscores the ongoing battles for equality and civil rights.

It’s the congressman’s third time introducing the bill, but the first with Democrats holding the House majority.

One of the panelists, Mathew Shurka, spent five years in conversion therapy, costing his parents $35,000. Three of those years were spent in Los Angeles. It was 2009, and he was 21 when it came to an end. Another panelist, Kate McCobb, saw a therapist who honed in on her sexuality, and encouraged her to date a male patient of his. McCobb filed a lawsuit against the therapist and reached a settlement in February.

“He told me that this was why I was lesbian,” McCobb said. “He also knew I was lesbian from the very first time I ever saw him. I felt comfortable as a lesbian, like I said, I did not have any intention to change my sexual orientation, but he told me that I was lesbian because when I was a little girl I had constructed a defense to protect me from the sexual abuse, and that that defense resulted in me thinking I was attracted to women.” 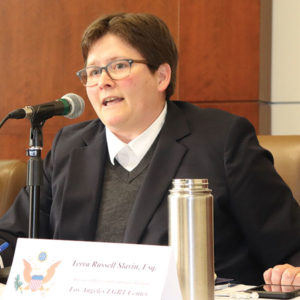 Conversion therapy can take the form of traditional sit-downs with psychologists, but has also included methods such as electric shock and nausea-inducing drugs.

“The trauma is not being LGBT,” she said. “It’s being rejected and being put through conversion therapy that is causing this harm.”

Russell-Slavin mentioned the high percentage of homeless youth that are LGBT. Some of them come from small, conservative towns that are hostile toward the LGBT community.

“A number are coming across state lines,” she said. “That’s part of why federal legislation is so imperative to address this challenge.”

Jenna Bushnell, a spokesman for Lieu, said a date has not yet been set for the bill to be introduced.