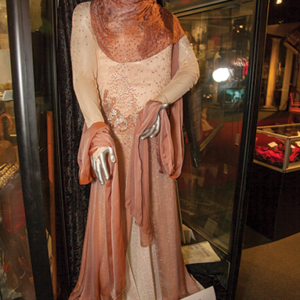 The exhibit features costumes, props, photos and iconic imagery, all telling the story of the milestones and influence that LGBT characters and plot lines have had in Hollywood from early stereotypes to modern-day representations.

Highlights include costumes and rainbow-inspired personal clothing from today’s hottest stars, from television shows and films such as “The Walking Dead” and “Orange is the New Black” and a costume worn by Rami Malek in his Academy Award-winning role as Freddie Mercury in “Bohemian Rhapsody.”

Additionally, “Real to Reel” celebrates LGBT icons – individuals and couples who may be openly LGBT or not, and who support the LGBT community – such as Ellen Degeneres, Cher, Katy Perry and Lady Gaga.

The exhibit also includes historic LGBT moments with the Rev. Troy Perry, including the Black Cat riots (1967) and the infamous sign that once hung at the entrance of West Hollywood’s Barney’s Beanery.

“The museum welcomes the opportunity to create and showcase this important exhibition, sharing with the public the artistic expression and extraordinary significance of LGBT culture and its effect and impact on the world through the medium of entertainment,” said Donelle Dadigan, founder and president of the Hollywood Museum.

Celebrate Pride with the family at Farmers Market and The Grove