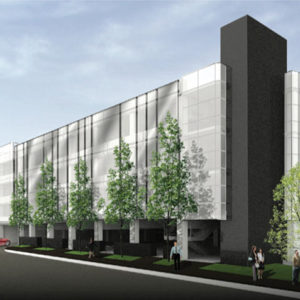 The nonprofit group Fix the City is suing Los Angeles County, the Los Angeles County Museum of Art and the Board of Supervisors claiming a planned parking garage will create problems for the neighborhood. (photo courtesy of the Miracle Mile Residential Association)

On May 13, Fix the City, a nonprofit whose website says it pursues public safety and land-use issues, filed a lawsuit that claims parking for the new LACMA building doesn’t take Metro riders from the Purple Line Extension, which is expected to open in 2023, into account.

Jim O’Sullivan, who serves on Fix the City’s board of directors, said the new LACMA building’s final environmental impact report, which was certified by the supervisors as part of the April approval, includes cars driving to the Academy Museum and LACMA, but not the Metro station, which provides no parking, and doesn’t mitigate the effect those extra cars will have on the neighborhood.

The environmental impact report for the Purple Line Extension shows as many as 238 cars per day could be looking for parking near Wilshire/Fairfax Metro station, which is adjacent to the site of the planned LACMA parking structure on Ogden Drive.

Ken Hixon, senior vice president of the Miracle Mile Residential Association, said his group supports the lawsuit from Fix the City, which is “acting on an issue that we’d raise.”

“With the Metro subway station, they’ve acknowledged they’re going to create a parking demand they can’t meet, and now LACMA is building a garage there,” Hixon said.

O’Sullivan, who also serves as president of the MMRA and has opposed museum renovations in the past – such as when he unsuccessfully appealed the approval of the Petersen Automotive Museum’s façade in 2013 – said Metro riders might further strain an already tight parking situation in the Miracle Mile. The Ogden parking structure will not add significant new parking to the area as it’s replacing the 260-space Spaulding Avenue parking lot, which will now be part of the new building that spans Wilshire Boulevard.

“People who show up [when] there’s no parking start driving around the neighborhood looking for parking space, and that endangers children, animals, seniors and causes more air pollution,” O’Sullivan said.

O’Sullivan said on exceptionally busy days, parking issues are already so bad that drivers will block driveways and residents’ cars, leaving them unable to leave the house.

“I had friends who were standing in their driveway screaming at people, ‘What are you doing?’ … We don’t want that to happen again,” O’Sullivan said.

Jessica Youn, interim director of communications for LACMA, said the museum would not comment in light of pending litigation and deferred to the county’s input on the environmental impact report.

O’Sullivan said under the California Environmental Quality Act, validation is not an acceptable way to mitigate the impact on the surrounding area.

On May 14, the Mid City West Community Council voted to oppose the Ogden Lot and support the land being used for affordable housing or assisted living instead, an idea that the MMRA supports.

By all means let’s get going with building the new LACMA building, but the Miracle Mile residents and Fix This City definitely make a good argument regarding the proposed parking structure at Ogden. That would be much better served as transit-adjacent apartments with an affordable component. It would definitely create a hazard in the surrounding neighborhoods and is a poor use of space. How about removing that space-wasting “levitating” rock sculpture sitting on LACMA’s land and put some parking there. It’s not all that special.