Black liquid tar has been bubbling up through the Earth’s surface near present-day Wilshire Boulevard and Curson Avenue for millions of years. With that history and its scientific importance in mind, the famous site where La Brea Tar Pits and Museum is located is poised to undergo major changes in the coming years. 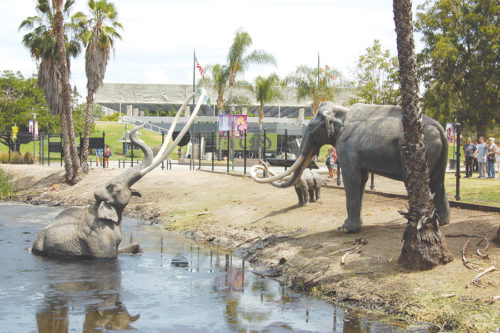 Plans are currently being formulated for the La Brea Tar Pits and Museum site, which will undergo a transformation in the coming years. (photo by Edwin Folven)

Dr. Lori Bettison-Varga, president and director of the Natural History Museums of Los Angeles County, which oversees operations at the La Brea Tar Pits and Museum (formerly the George C. Page Museum of La Brea Discoveries), announced on June 6 that three teams of architects have been selected to create plans to transform the 12-acre Tar Pits campus. No timeline has been announced for when the project will be completed. Plans from the architect-led teams – Dorte Mandrup of Copenhagen, Denmark; and WEISS/MANFREDI and Diller Scofidio + Renfro, both of New York –  are expected by late August.

After the plans have been submitted, they will be opened to public comment. Once the Natural History Museums of Los Angeles County reviews the plans and considers feedback, the firm to lead the project will be announced by the end of 2019.

“La Brea Tar Pits and the Page Museum are the only facilities of their kind in the world – an active, internationally renowned site of paleontological research in the heart of a great city, and a museum that both supports the scientists’ work and helps interpret it for more than 400,000 visitors a year,” Bettison-Varga said. “We are excited to seize this once-in-a-lifetime opportunity to not just renovate these facilities thoroughly but also to think deeply about how to make them function as well for neighbors and guests over the next 40 years as they have for the last 40, perhaps even better. We look forward eagerly to seeing the concept proposals and hearing from our community.”

“La Brea Tar Pits and the Page Museum are enormously popular and valuable cultural assets for the county, attracting neighbors, school children from across the metropolitan area, and visitors from around the world,” said Los Angeles County Supervisor Sheila Kuehl, 3rd District. “The Tar Pits are known everywhere as a visual symbol of the cultural and long natural history of Los Angeles. The Board of Supervisors is proud to support this forward-thinking effort by the Natural History Museums to create a vibrant and engaging future for this exciting and important public resource.”

Neighbors in the Miracle Mile are enthusiastic about the revitalization.

“I think this commitment to the La Brea Tar Pits is very exciting,” said Stephen Kramer, president of the Greater Miracle Mile Chamber of Commerce. “It focuses energy on the site and what they intend to do with it. The Natural History Museum clearly recognizes the importance of the La Brea Tar Pits. We take the Tar Pits for granted, those of us who live here in the Miracle Mile.”

Kramer remembered flying kites on the grounds around the Tar Pits as a child, adding that it was an empty dirt lot at the time. He also recalled a trip to Paris approximately 20 years ago when he saw a newspaper with a front page article about the site.

“It shows the international interest the Tar Pits have,” he added. “It also shows what the site means to the scientific community.”

The La Brea Tar Pits and Museum is an active archeological site where paleontologists remove and analyze fossils. The Page Museum opened in 1977. The 57,000-square-foot-facility houses more than 2 million specimens removed from the Tar Pits including those from mammoths and saber-toothed cats.

Because the current museum is partially recessed in the ground, it has been difficult to expand programming, according to a press release from the Natural History Museums of Los Angeles County. Improvements and enhancements have been made to the Tar Pits, museum and surrounding park over the years, but the long-term reimagining project will be much more comprehensive.

The La Brea Tar Pits and Museum will continue its programming in the meantime. The Second Home Serpentine Pavilion by SelgasCano from June 28 through Nov. 24 on the grounds near the Tar Pits and Museum. The pavilion will offer a flexible, multi-purpose social space in which to enjoy public programs and events focusing on the intersection of art, design, science and nature. It is expected to attract a significant number of new visitors.

“The La Brea Tar Pits and Page Museum are unlike anything else in Los Angeles – or the world,” Los Angeles City Councilman David Ryu, 4th District, said. “They spark curiosity in people from across the world, provide hands-on research to paleontologists, and literally excavate our city’s history right before our eyes. We are so lucky to have this treasure in the heart of our city, as both a working museum and community open space, and I can’t wait to see how it adds to the Miracle Mile’s exciting future.”

Thousands of people 'just unite’ at the 49th annual Pride