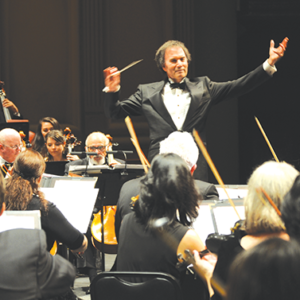 The Los Angeles Lawyers Philharmonic & Legal Voices, under the baton of Gary S. Greene, Esq., will perform on Saturday, June 29, at 8 p.m. at the Walt Disney Concert Hall.

Radio Personality Bill Handel will serve as master of ceremonies for the concert, which raises funds for the Los Angeles County Bar Association Counsel for Justice and the Beverly Hills Bar Association Foundation. The Los Angeles Lawyers Philharmonic and its chorus, Legal Voices, are comprised of lawyers and judges who are also musicians. They may be on opposing sides in the courtroom but come together in harmony through the universal language of music, Greene said.

The concert celebrates the Los Angeles Lawyers Philharmonic & Legal Voices’ 10th anniversary. The concert also includes legendary television and film composer Charles Fox (known for the song “Killing Me Softly” and the themes from “Happy Days,” “Laverne & Shirley,” “Love Boat” and more). It will feature “O Fortuna” from “Carmina Burana,” the “Ode to Joy” from Beethoven’s 9th Symphony and a salute to composer Fox, who will conduct selections from his repertoire and will receive honorary membership in the orchestra.