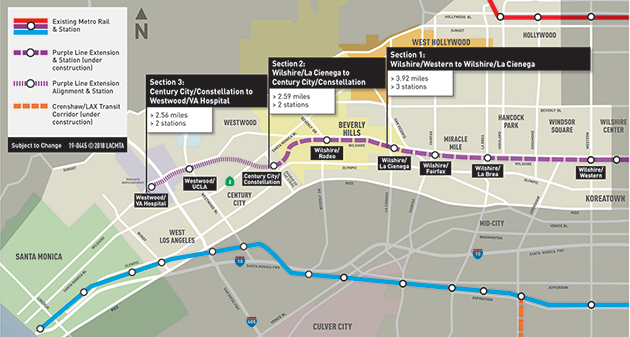 The Beverly Hills Unified School District has been battling Metro in court for years in an attempt to change the Purple Line Extension’s tunnel alignment that goes underneath Beverly Hills High School. (graphic courtesy of Metro)

A court hearing scheduled for this morning is set to decide the longstanding conflict over a subway tunnel underneath Beverly Hills High School.

The Beverly Hills Unified School District has been unsuccessful for nearly 10 years in its multiple legal attempts to have the tunnel rerouted to avoid Beverly Hills High School. The most recent ruling was in 2016, when District Court Judge George Wu affirmed the Federal Transit Administration’s approval of the project, but also required the agency to redo parts of the project’s environmental studies pertaining to seismology and methane near the high school and Century City. Metro completed that supplemental study.

Wu will consider competing motions by the school district and Metro to grant a summary judgement in favor of one of them.

The district filed its most recent lawsuit in January 2018, arguing that Metro committed funds to constructing the alignment that goes under the high school while the agency was supposed to be evaluating other options. Metro and the FTA argue that the pre-construction activities were underway for Phase 2 of the Purple Line Extension to keep the project on schedule, and would have been reversible had the court required a change in alignment after that additional review.

The district is also arguing for the court to consider a wider scope of evidence that its attorneys say will support their claim that Metro committed to the route under the high school without properly vetting alternatives.

“Metro’s evidentiary objections are without merit and should be overruled,” read a recent court filing by attorneys representing the school district.

Beverly Hills Unified School District Superintendent Michael Bregy was not available for comment before press time, but reiterated the district’s position in a statement last month.

“The agencies then used the money and time they spent on the planned alignment as an excuse not to select viable alternative routes that would be more direct, cost less money and still go to the center of Century City, but would not travel under any classrooms,” he said. “There is no reason for Metro or FTA’s intransigence. Based on well-established case law, their conduct is not only unreasonable but also violates our country’s foundational environmental laws and should be overturned.”

Metro spokesman Dave Sotero said previously that Metro will not comment further on the case until after the hearing. But in a 60-page memo to the court filed earlier this year, attorneys representing Metro and the FTA said that claim is “factually unfounded and contradicted by the record.” The seven-year-long legal battle by the district against Metro and the FTA – which has played out in L.A. County Superior Court, the Ninth Circuit Court of Appeals and U.S. District Court – has not changed the currently planned tunnel alignment.