Jewish Family Service of Los Angeles held its 26th annual gala on May 29 at the Beverly Hilton Hotel. More than 700 people attended the event, which raised $1.3 million for JFS’ services. 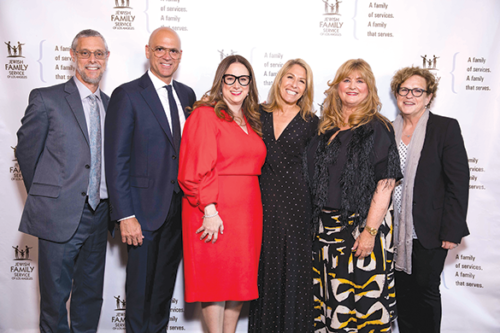 Brett Paul and Susan Rovner, presidents of Warner Brothers Television and Warner Horizon Scripted Television, received the Spirit of Humanity Award for their commitment to helping vulnerable community members and support of JFS. The Anita and Stanley Hirsh Award was given to Eileen Brown, David O. Levine and Dena Schechter, longtime members of the JFS Board of Directors.

A Special Recognition Award was also presented to Lois and Richard Gunther, and Anita and Stanley Hirsh, major donors to the capital campaign. JFS has named its new headquarters and service center on Fairfax Avenue as the JFS Gunther-Hirsh Family Center.

JFS provides comprehensive family of services that improve quality of life for tens of thousands of people regardless of age, economic status, religion, ethnicity, nationality, sexual orientation and gender identity. Programs include healthcare and mental healthcare, shelters for survivors of domestic violence and their children, and counseling for at-risk children and families. For information call (877)275-4537, or visit jfsla.org.