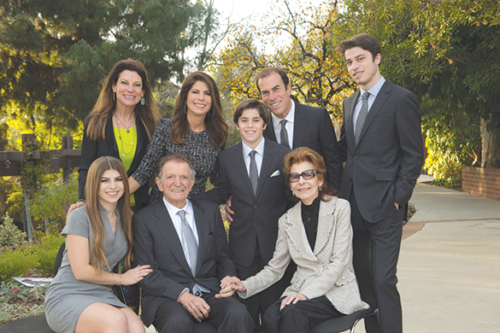 Cedars-Sinai Medical Center has announced that the family of the late real estate developer and philanthropist Jona Goldrich has donated $10 million to create the hospital’s Jona Goldrich Center for Alzheimer’s and Memory Disorders.

Melinda Goldrich and Andrea Goldrich Cayton made the donation in honor of their father, a Holocaust survivor who created a nationwide real estate empire centered in Los Angeles. Goldrich died in 2016 at the age of 88.

The center, to be established within the Cedars-Sinai Department of Neurology, will recruit physician-scientists to develop new patient care therapies for patients with Alzheimer’s disease and other memory disorders. The Goldrich family has committed to giving an additional $5 million in matching donations, potentially doubling the contribution for the center to $20 million.

“This generous and transformative gift from the Goldrich family is an enduring testament to Jona’s life,” said Cedars-Sinai President and CEO Thomas M. Priselac. “The Jona Goldrich Center for Alzheimer’s and Memory Disorders will position Cedars-Sinai as a leader in the Los Angeles community and beyond in treating the devastating effects of Alzheimer’s disease and other memory disorders.”

Alzheimer’s disease is the leading cause of dementia, which is characterized by loss of memory and decline in cognitive function. According to the Centers for Disease Control and Prevention, the number of Americans living with Alzheimer’s disease is projected to triple to nearly 14 million by 2060.

The family made the donation to make a difference in the fight against Alzheimer’s disease.

“We want families to have options for the treatment and prevention of the devasting symptoms of Alzheimer’s and memory disorders,” said Melinda Goldrich.

“Honoring our father’s memory by establishing the Jona Goldrich Center for Alzheimer’s and Memory Disorders is our commitment to eradicating these diseases,” added Goldrich Cayton.

Jona Goldrich was born in Poland in 1927. He and his brother Avram escaped Nazi-occupied territory and moved to Palestine in 1942.

In 1954, Goldrich immigrated to the U.S. and started a construction cleanup business. He went on the create an extensive real estate empire that extended coast to coast.

Goldrich was also a Jewish philanthropic leader in Los Angeles. In 1987, he created the Goldrich Family Foundation to continue efforts to cure diseases, support schools and universities, promote social justice and further Holocaust awareness and remembrance.

Have ‘Dinner with Friends’ in Beverly Hills