The property owner of the site in Beverly Hills where the Gibraltar Square Savings corporate headquarters was located wants to turn the building into a 154-room hotel, according to a news release. 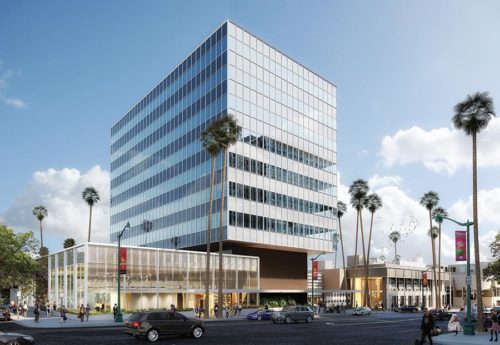 The former home of Gibraltar Square Savings might be turned into a hotel and restaurant by Oakshire LLC. (rendering courtesy of Marathon Communications)

“When the opportunity to purchase these beautiful buildings came our way, we jumped at the chance because they are architectural treasures of Beverly Hills,” Gabay said. “We take our responsibility as stewards of these historic landmarks seriously, and we are undertaking this project to ensure that they live on for future generations to enjoy. The project will not just extend the functional life of these treasured buildings but will also serve as a better neighbor to our neighbors.”

In addition to the hotel, the project also includes the property’s Kate Mantilini space, which will house a new restaurant.

The project will help “revive the eastern edge of Wilshire Boulevard,” Gabay added, and “will create much-needed street life and excitement in this long-overlooked part of the city.”

“The plans also call for opening up and restoring the building’s original entryway and exterior character with improvements that will replace the exterior glazing and plaza hardscape and upgrade the landscaping,” according to the news release. “The result will create an inviting pedestrian experience for guests and local residents alike.”

The 60-year-old building was designated a historic resource in the city of Beverly Hills by the City Council in 2016. Some of the building’s notable features include its open metal canopy and mural by John Wehrle in the building’s interior.

According to a report prepared for the city by an architectural history firm, Gibraltar Savings and Loan expanded to 83 branches throughout the state until the federal government seized its assets in 1989, in the aftermath of the savings and loan crisis. The New York Times reported in 1990 that is was “the largest institution to have failed in recent years.” The company’s remaining assets were sold to the Security Pacific Corporation in 1990, leading to Gibraltar’s dissolution.

Beverly Hills Mayor John Mirisch did not respond to a request for comment.

Take a sweet ride after the Honey Harvest Festival