Get the answer to life, the universe and everything at the Wallis

The Wallis Studio Ensemble’s “The Hitch-Hiker’s Guide to the Galaxy,” based on Douglas Adams’ much loved, absurdist and subversive satire, is back at the Wallis Annenberg Center for the Performing Arts by popular demand from Thursday, June 6, through Sunday, June 9, in the Lovelace Studio Theater. 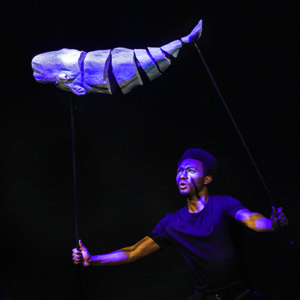 From June 6-9, the Wallis Studio Ensemble will perform “The Hitch-Hiker’s Guide to the Galaxy,” which uses puppetry, stylized movement, miniature sets and live music to bring Douglas Adams’ classic story to life. (photo by Jo Rodriguez)

After its first appearance as a radio play, originally produced by BBC 4 Radio in 1978, Adams’ work quickly became a worldwide cult classic celebrated for its sharp wit and ironic style.

A true space opera, commonly referred to by its adoring followers as “HHGG,” the story begins after the earth is completely destroyed to make way for an intergalactic bypass. The last human, now known as Martha Dent – in a switch from Adams’ original main character, Arthur Dent – and her intergalactic traveler sidekick, Ford Prefect, take a hysterical journey through unsuspecting parts of the galaxy hoping to discover the meaning of life, the universe and everything.

Director Madeleine Dahm’s version at the Wallis integrates puppetry, stylized movement, miniature sets and live music to bring the timely political satire to life. First presented in 2018, this hilarious, vibrant, fast-paced, gender-bending romp was a Los Angeles Times “Pick of the Week” and described by ArtsNowLA as “unmitigated lunacy with Ferrari-like pacing, a deep dive into hallucinogenic territory.”

Each night, audience members are invited to come in sci-fi costumes, take photos at the designated “selfie spot” and tag #ZaphodsCloset. A winner will be chosen after every performance to receive two tickets to a performance of their choice in the Wallis’ 2019-20 season.

Wallis Annenberg Center for the Performing Arts is located at 9390 N. Santa Monica Blvd. For information, visit thewallis.org/hitchhiker, or call (310)746-4000.

VINTAGE: A look back at the Pride of the past