In a packed City Council meeting on June 17, the West Hollywood City Council voted to allow the city’s four cannabis dispensaries to keep selling adult-use recreational marijuana on temporary permits, though no permanent relief was offered. 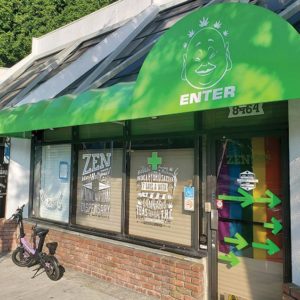 West Hollywood’s cannabis dispensaries, like Zen on Santa Monica Boulevard, were given a temporary reprieve on June 17. (photo by Cameron Kiszla)

The council voted 4-1 to uphold the results of the selection committee’s scoring, with City Councilman John Duran voting against the motion.

Duran’s support of the four dispensaries – Zen Healing Collective, Los Angeles Patients and Caregivers Group, MedMen WeHo and Alternative Herbal Health Services, which collectively call themselves the “West Hollywood Originals”­– was greeted loudly and enthusiastically by the majority of the crowd.

Duran said the city had made some mistakes in its selection process, which was intended to be a fair way to choose the best cannabis businesses for West Hollywood, with eight permits each for recreational, medicinal, delivery, consumption lounge and edible-only consumption lounge businesses.

The other four council members, however, said it would be unfair to change the results of the selection process after the results have already come out. All four of the businesses failed to garner any of the eight recreational permits in the city’s selection process, which used five committee members selected by City Manager Paul Arevalo. Applicants, their representatives and City Council members were prohibited from contacting the committee members or the Business License Commissioners, in order to create an impartial system.

Some speakers wanted the city to expand the number of permits available for adult-use sales, as two of the Originals, Los Angeles Patients and Caregivers Group and Zen Healing Collective, finished ninth and 10th, respectively, in the city’s recreational sales scoring. The council, however, declined to increase the number of permits and decided to stick to the committee’s findings.

“We have a process, and we want to protect the integrity of that process,” Mayor Pro Tempore Lindsey Horvath said.

During the lengthy public comment portion of the meeting, approximately 30 West Hollywood Originals’ supporters, many of whom wore T-shirts adorned with the Originals’ rainbow-colored cannabis leaf logo, said medical sales alone won’t be enough to sustain the businesses and urged the council to award them recreational permits in order to save the employees’ jobs and continue to serve some customers who’ve visited the same stores for years.

“We don’t put successful businesses out of business. We support them,” Litz said.

The Originals had more supporters in the room, but many of the companies that were awarded permits also appeared to fight against any potential changes of the rules after the results were announced.

Jake Stevens, a representative of recreational and delivery permit awardee CALMA, said the City Council decided against awarding any bonus for existing businesses in the scoring process, and it was only once they lost that the “sore losers” began to take issue with the selection system.

“We all entered our applications on a level playing field and everyone understood the rules of the game,” Stevens said.

On one issue, however, the council left the door open for changes to the process.

For edible-only consumption lounges, the permits were awarded with the expectation that the lounges would be able to sell food and beverages as well as cannabis products. However, in January, state regulations prohibited non-cannabis sales by cannabis lounges, which might make edible-only consumption lounges unviable, as there would be little for customers to do after ingesting their edibles.

City staff members said they will continue to lobby state officials to change the regulations. In the meantime, they’ll bring recommendations for the consumption lounges back to the council at a future date.

About the selection committee:

The cannabis application evaluation committee was made up of five members with experience in city government or the cannabis industry. The committee members were instructed to “independently review and score each application the city received based on specific criteria and weighting” in more than 50 categories, according to the city’s staff report. Considerations included product offerings, social equity, connection to West Hollywood, design concept, security plan, overall quality and more. To see a brief history of the selection process, the committee’s selections in all five categories and descriptions of each the permit awardees, visit weho.org/home/showdocument?id=39158.