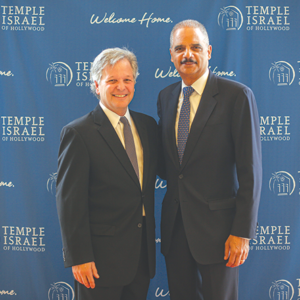 Holder currently serves as chairman of the National Democratic Redistricting Committee and spoke about his ongoing work on voting rights issues, legislative redistricting and the importance of ensuring fair elections.

The award was established in honor of Rosove’s 30 years as senior rabbi of Temple Israel of Hollywood and his work promoting social justice.  Rosove is retiring as senior rabbi this month. Mayor Eric Garcetti presented the award.

Holder served as U.S. Attorney General in the Obama administration from February 2009 to April 2015. He was the third longest serving Attorney General in U.S. history and the first African American to hold the office. Under Holder’s leadership, civil rights, including voting rights, were a top priority in the U.S. Justice Department. Holder defended voting rights, including the enforcement of the Voting Rights Act of 1965.

“I’m deeply honored to receive the inaugural Rabbi John L. Rosove Justice Award,” Holder said. “Throughout his life of service, Rabbi Rosove has dedicated himself to social justice and giving back to his community.”

“It is a great honor for the first Justice Award presented by Temple Israel in my name to be given to Attorney General Eric Holder, who embodies among the most important values of the Jewish people and a liberal democracy, the values for which this award is intended,” Rosove added. “In thinking of Attorney General Holder, the verse from Deuteronomy 16:20 immediately comes to mind, “Justice, justice shall you pursue.’”