On June 11, the Los Angeles City Council’s Planning and Land Use Management Committee approved the Fairfax Avenue building once home to Tom Bergin’s Irish pub for historic-cultural monument status, but removed the building’s parking lot from consideration so housing could be built there. 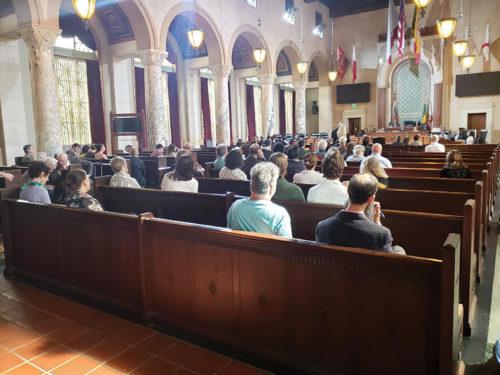 Supporters and opponents of historic-cultural monument status for the Tom Bergin’s Irish pub building came out in force to the June 11 meeting of the PLUM Committee of the Los Angeles City Council. (photo by Cameron Kiszla)

“It’s a Solomon decision. They split the baby,” said Ken Hixon, senior vice president of the Miracle Mile Residential Association, which supports the landmark designation with the Los Angeles Conservancy. “But I’d rather have a historic building than a historic parking lot.”

PLUM committee member Councilman Gil Cedillo, 1st District, proposed the amendment that excluded the parking lot from the landmark designation. Cedillo referred to the recent homeless count numbers, which showed an increase in the city and county, when explaining his decision.

“We have an opportunity here to reach a working compromise, at least with some partition of the property and the building. It seems that that’s something that meets both parties’ concerns, an ability to build … and at the same time, some preservation of the building,” Cedillo said.

The MMRA and Conservancy had several dozen supporters in attendance, many of whom wore green or shamrocks to show their affiliation. A sizeable contingent of opponents were also in the council chambers at City Hall, including Tom Bergin’s owner Derek Schreck, his family and attorney, Benjamin Reznik, though the supporters outnumbered the opponents.

During the lengthy public comment portion of the meeting, which featured more than 30 speakers, Hixon, former owners and employees of Bergin’s, and customers of the eatery and bar reminisced about the impact it made before its 2018 closure. Bergin’s had been in business since 1936, and since 1949 at the Fairfax location.

During his public address, Hixon quoted an interview Schreck gave when he purchased the bar.

“‘It’s easy to shine when you’re working with gold,’ Schreck said. ‘This place is an institution. This isn’t an ownership. This is a stewardship. We need to take care of this place for the next generation.’ And I echo that sentiment,” Hixon said.

The meeting was contentious, and members of the public clashed during the meeting as both sides cheered on their respective public speakers and jeered the opposition. The conflict continued out into the hall after the committee’s decision.

After the meeting, Schreck said it’s a “blessing” that the debate is nearing an end for Bergin’s, a business Schreck said he wanted to succeed as badly as anyone, but has become a financial burden for him and his family to the point where he’s at risk of losing his home.

Schreck, who bought Bergin’s and the building six years ago, said the business is unsustainable without a base of regular customers, which the surrounding neighborhood has not provided.

Shreck added that he’s been in touch with a few developers who would like to build housing on the parking lot, though nothing formal has come of it because the historic-cultural monument designation has not yet been decided. Now that the matter is nearly over – the landmark designation will come before the full council within the next week – Schreck said he wants to work with developers who will create a project that fits in with the neighborhood.

“It’s not going to be something gaudy or awful … I don’t want there to be a crazy development that’s looking into my backyard,” Schreck said.

Hixon said his group would be happy to work with Schreck so this saga could have a “happy ending.”

“I just told him that if they’ve got plans or ideas that are concrete, to come to us at the MMRA and the L.A. Conservancy. We’d be happy to review them, and we’d do whatever we could to support the future economic viability of Tom Bergin’s,” Hixon said.