Cathedral Chapel School in the Miracle Mile received special recognition on June 4 for improving the environment through recycling. 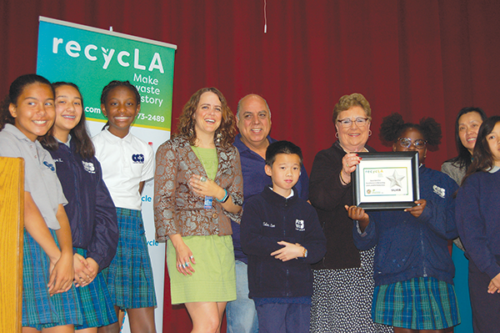 LA Sanitation awarded the school a silver star for its participation in the recycLA program over the past year. The school was given separate bins for recyclables, food waste and trash, and students and staff were tasked with placing items in the appropriate receptacles. The school achieved a 63% diversion rate for recyclables and food waste, eliminating it from being deposited in landfills. Cathedral Chapel was one of three private campuses to be included in the recycLA pilot program and the first to receive recognition. The program is just getting underway at other schools including Le Lycée Français de Los Angeles in West Los Angeles and Bais Yaakov on Beverly Boulevard.

“Cathedral Chapel School has done an outstanding job,” Principal Tina Kipp said. “We learned a lot through our recycle program. It’s been a real team effort here at Cathedral Chapel.”

The program was administered in conjunction with the school’s trash hauler, Athens Services. Students were taught about the importance of recycling, including which items to place in which bins. “Eco-leaders” were appointed in each grade to help spread the word and encourage others to participate.

Blue and black bins were placed in every classroom and students created color-coded signage for each bin. Different bins were also placed on the playground to help students separate recyclables, organics and trash after lunch.

Many students bring lunches, and they separated food waste from plastic bags and other recyclables. Those who buy lunch also placed containers and waste in the appropriate bins. The food vendor, Choicelunch, uses compostable trays and cellophane wrap made from sweet potatoes, boosting the campus’ recycling efforts.

School staff recycled paper, plastic bottles and other items. Everyone at the campus was very enthusiastic about participating in recycLA, said administrative assistant Karen Hall.

“I am so pleased with how all the kids worked so hard to take care of our environment,” she added. “They did great and were really excited to participate. The little kids were exceptional.”

Joan Huang, assistant division manager for the recycLA program, and Jessica Aldridge, sustainability director for Athens Services, attended a ceremony in the school auditorium and presented a silver star certificate to administrators. The auditorium erupted with cheers as the approximately 270 students applauded the accomplishment.

The recycLA program was launched in 2018 as a partnership between the city and private trash hauling companies. It offers recycling for all commercial businesses, private institutions and large multi-unit residential buildings. Public schools are served through a different recycling program.

According to LA Sanitation statistics, more than one million cubic yards of recycled materials were collected monthly in the blue recycling bins citywide during the first year of the program. Trash haulers also collected over 24,000 tons of organic waste in 2018.

The program encourages children to teach parents about the importance of recycling and the lessons they’ve learned through recycLA. Plans call for the program to continue next school year with the goal of diverting even more items from landfills.