Artists-in-residence program could be coming to Tara 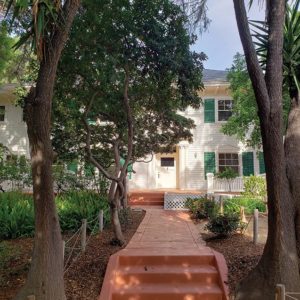 The property at 1343 N. Laurel Ave. in West Hollywood, now home to Laurel Park and the 102-year-old Laurel House, also known as “Tara,” may be used for artists-in-residence programs after a June 3 vote by the West Hollywood City Council. (photo by Cameron Kiszla)

On June 3, the West Hollywood City Council voted 3-1 to look into potential uses for the property at 1343 N. Laurel Ave., including the possibly of a home for artists-in-residence programs. Mayor Pro Tempore Lindsey Horvath was absent, and Councilman John Heilman was the lone no vote, citing the potential cost of the program and the need for artist housing, as opposed to other groups. An earlier city staff report about the property said while the exact cost of upgrading and renovating the buildings won’t be known until a feasibility study is performed and contractor bids are received, it will require “significant capital expenditures.”

“Prioritizing artists over social workers or teachers or disabled long-term residents of the city doesn’t seem to make sense, given the amount of money that we’re likely going to have to spend to rehab this property,” Heilman said.

Mayor John D’Amico said artists have long been an integral part of the city, but high real estate prices and rent may be discouraging creatives from moving to West Hollywood.

“I think this is a way for us to pay attention to our creative class that has really been responsible for much of West Hollywood’s well-deserved and quite prosperous creative name,” D’Amico said.

Currently, the grounds of the 30,000-square-foot lot are used as a park, with picnic tables and a trail system for dog walkers, while the nearly 7,200-square-foot main house and nearly 2,400-square-foot chauffer’s cottage and garage are “mothballed without providing any utility to the community,” Councilman John Duran said.

The house, which was built in 1917 and is known as “Tara” in a reference to the plantation from “Gone with the Wind,” was split into four apartments in 1941, and the property was declared a local cultural resource by the city in 1994.

Several years ago, the city wanted to further divide the house and chauffer’s cottage and turn them into affordable housing for seniors, but a lengthy court battle that culminated in a 2008 California Supreme Court ruling against the city complicated the process, and the city was unable to get the project started again. The structures have been vacant since the city, which was given the property in 1997 by owner Elsie Weisman, evicted the apartment residents in 2005.

During the public comment section of the meeting, Manny Rodriguez, who serves on the board of the West Hollywood West Residents Association but addressed the council in a personal capacity, said he’d still like Tara to be used for housing. The other public speaker, Steve Martin, a former city councilman who supports preserving Tara, said he likes the idea of an artists-in-residence program.

“We could build all types of facilities there, whether it’s for potters, painters, sculptors, glass blowers. There’s all types of exciting things that can happen there,” Martin said.

The council’s Laurel Subcommittee, made up of Duran and Councilwoman Lauren Meister, said the artists-in-residence program could involve using the ground floor of the house as a community space while preserving the outside areas as a public park.

Meister said the program could involve artists actually living at the property or artists working at the site and providing classes and other community-oriented services, “something the community really liked.”

Duran said it’s important that whatever the buildings are used for, they can’t attract large crowds, as that would require building more parking, which would require “tearing up the grounds, which we don’t want to do given that that’s one of the more attractive features of the properties.”

“It’s an attempt to try to balance historic preservation, along with public park space, along with community utility and community-use space to come up with something so that the property doesn’t languish there without providing any benefits to the community,” Duran said.