AIDS Healthcare Foundation announced on May 30 that it has made an unsolicited offer to CIM Group to purchase the vacant Sunset Gordon tower for $50 million. 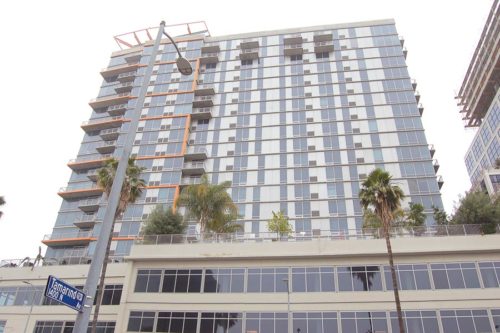 The Sunset Gordon building has been vacant for three years pending litigation. AHF wants to buy the building and turn it into affordable housing. (photo by Edwin Folven)

The 22-story tower has been vacant for the past three years after a Los Angeles Superior Court judge invalidated its construction permits because the developer demolished a portion of the façade of the Old Spaghetti Factory restaurant that was supposed to be preserved. Last December, it was announced that the CIM Group and the city of Los Angeles had come to an agreement that would allow entitlements for occupancy to move forward if 45 of the 299 units were designated as affordable housing. AHF, through its involvement with the Coalition to Preserve L.A., filed a lawsuit against the city and CIM Group shortly after the agreement was announced contending not enough units would be designated as affordable. AHF has agreed to drop the pending lawsuit if CIM Group accepts the purchase offer.

CIM group has no comment about the purchase offer and lawsuit, spokeswoman Karen Diehl said. AHF spokesman Ged Kenslea said he was not surprised.

“We haven’t heard back from them yet. I do not believe the building is for sale,” Kenslea said. “It’s an open offer. I’m sure it is going to be ignored.”

If AHF is allowed to buy the building, the organization plans to convert the existing units into 1,000 smaller affordable spaces.

“The lawsuit is to compel CIM to up the number of affordable units in the complex,” Kenslea added. “This is a white elephant for CIM. It’s been vacant for three years.”

“We intend to turn the complex into over 1,000 smaller housing units,” AHF President Michael Weinstein said. “CIM can settle the coalition’s lawsuit and add many more affordable units, or they can sell the entire property to us so we may repurpose the complex for more – and more truly affordable – housing units.”

The purchase offer was made prior to the release of statistics that showed a double-digit increase in the number of homeless individuals in the county and city of Los Angeles. Kenslea said the lack of affordable housing and an increase in homelessness are intertwined. He addressed criticism about an HIV/AIDS services provider becoming involved with housing issues by citing that the organization’s initial purpose in the 1980s was to provide hospice care for people with the disease because many landlords at the time refused to rent to them.

“What we are saying is stable housing is a linchpin in health outcomes, especially if someone has a critical health condition,” Kenslea said. “Plus, it’s a moral issue. Is housing a commodity or is it a right?”