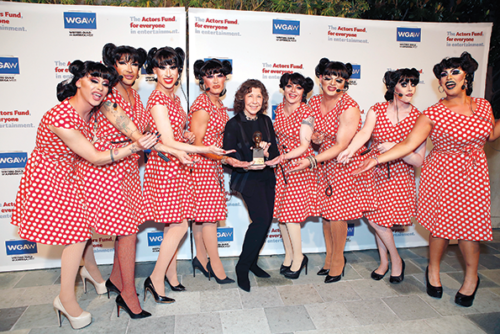 Drag queens dressed as Lily Tomlin’s iconic character Ernestine escorted the famed comedian and actress to the stage when she was honored at the Actors Fund’s 23rd annual Tony Awards Viewing Gala at the Skirball Cultural Center on June 9.

A Grammy, Tony and Emmy Award-winning actress and comedian, Tomlin was awarded the Julie Harris Award for Artistic Achievement.

Celebrity guests of the gala included Christina Bianco of “Me, Myself and Everyone Else,” Alex Landi of “Grey’s Anatomy,” and Tomlin’s “Grace and Frankie” costars Baron Vaughn and Sam Waterston, the latter of whom presented Tomlin with the Julie Harris Award.