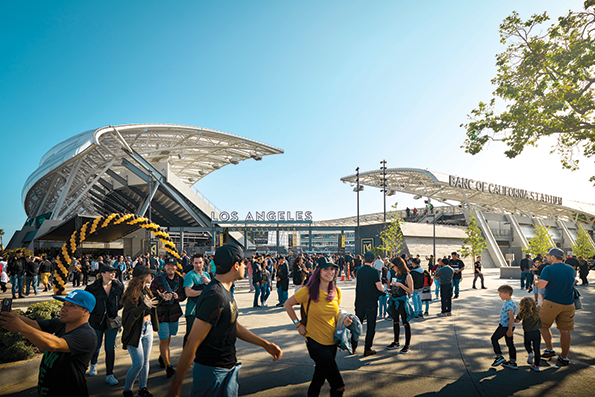 On June 21, the Los Angeles Business Council celebrated the winners of its 49th Annual Architectural Awards, honoring projects that bring people together and foster collaborative, memorable experiences among Angelenos. From a competitive pool of hundreds of submissions in 23 design categories, winning projects ran the gamut, from urban micro-living units to beachfront hotels.

More than 650 leading architects, designers, building owners, developers and city officials gathered at the awards ceremony held at the Beverly Hilton. Winners were selected by a jury panel of industry experts.

This year’s grand prize winner, the groundbreaking LAFC Banc of California Stadium in Exposition Park, was built entirely around the fan experience, with team executives soliciting ideas directly from soccer fans as part of the design process.

“We wanted to facilitate a design that was inclusive of the community, to build something that was not just for Los Angeles, but of Los Angeles,” said Jonathan Emmett, principal and design director at Gensler.

In recognition of the current housing crisis, the LABC’s Community Impact Award went to a collective of 23 nonprofit groups who have been leading the way in providing housing for low-income or homeless individuals in Los Angeles County. These groups are on the front lines of the crisis, providing shelter to those most vulnerable in our community.

“We honor them today because their core mission isn’t just to create housing, it’s to find people a home,” said Nadine Watt, LABC chair and president of Watt Companies.

Tour van driver arrested for alleged driving under the influence