A bank without a West Hollywood branch will soon handle the city’s money. 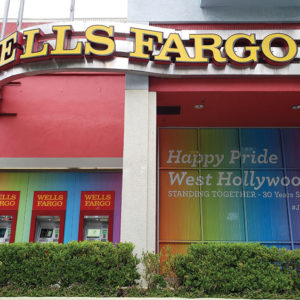 West Hollywood voted to discontinue banking with Wells Fargo and switch to Bank of the West, while using Union Bank on an as-needed basis. (photo by Cameron Kiszla)

In a 3-2 vote on May 6, the West Hollywood City Council chose to end its relationship with Wells Fargo and move to Bank of the West, whose closest location is in Beverly Hills, while using Union Bank on an as-needed basis. Councilmen John Duran and John Heilman voted against the move, just as they did when the city rejected Wells Fargo by a 3-2 vote in August.

Councilwoman Lauren Meister said the bank’s issues made her unable to support the city continuing to use Wells Fargo.

“Every week or every other week, there’s something else that comes out,” Meister said.

“We’re driven so hard to be socially conscious, and to have a pick that is socially subconscious or unconscious … it doesn’t send the right message,” Martin said.

However, in all of the city’s rankings – including one solely based on social responsibility – Wells Fargo was the top choice.

Last year, the city issued a request for proposals for banking services, and four banks responded: Wells Fargo, Bank of the West, Union Bank and US Bank. In city staff’s ranking of the proposals, Wells Fargo emerged as the best option to meet the city’s banking needs, but the council wanted to consider the city’s options further. In March, the city’s Finance and Budget Subcommittee had city staff send the four banks additional questions about customer service and social responsibility.

Both Heilman and Duran referred to the rankings when explaining their opposition to changing the city’s bank. Duran said the council was trying to “force an outcome” that was different than what the numbers suggested would be the best choice, and the council’s vote was counter to city staff’s ranking and the city’s financial best interests. According to the staff report, Wells Fargo would be the least expensive option for the city, followed by Bank of the West. Union Bank was the most expensive option.

“That’s the kind of bank I want to be doing business with,” Horvath said.

Carlos Corrales, accounting manager for West Hollywood, said the transition to Bank of the West and Union Bank for as-needed services can take between six and nine months. During the transition period, staff would work with all three banks, Corrales said.