The month of June is traditionally recognized as Pride Month, and each year, the city of West Hollywood celebrates LGBTQ pride with its One City One Pride LGBTQ Arts Festival, which runs for 40 days from Harvey Milk Day (May 22) through June 30. 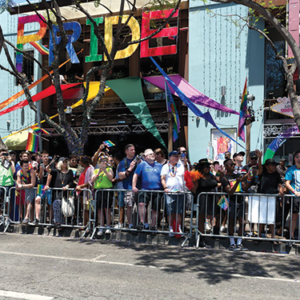 The LA Pride Parade in West Hollywood is one of many events scheduled for May and June to honor LGBTQ Pride. (photo courtesy of the city of West Hollywood)

The theme for 2019 is “Love is Love,” celebrating the universal bond that unites us – especially during this 50th anniversary year of the Stonewall riots.

The festivities will kick off on May 22 with a staged reading of “Dear Harvey,” Patricia Loughrey’s award-winning play about LGBT activist and politician Harvey Milk. The event, which begins with a One City One Pride Kick-off reception at 6:30 p.m., will feature celebrity guest readers from 7:30-9:30 p.m at the West Hollywood City Council Chambers, located at 625 N. San Vicente Blvd.

The night will also feature a pair of queer poetry pop-ups: “Let Love Flourish,” performances of poems by queer poets past and present, and “Everyone Deserves (A) Love (Poem),” an interactive installation where poets will write attendees a love poem.

The celebrations will continue through May and June, and a full list of events and performances can be found at weho.org/pride.

The LA Pride in West Hollywood festival will run June 7-9. This year’s performers include Paula Abdul, Meghan Trainor and Years & Years, with the Pride parade – the oldest in the world – scheduled for 11 a.m. June 9 on Santa Monica Boulevard.

On June 26, “LA: A Queer History,” a documentary about L.A.’s contributions to the LGBTQ rights movement, will debut in the City Council Chambers.

On June 30, a full day of programming includes readings from gay actor and pioneer Michael Kearns’ troupe, QueerWise; the debut of the film “¡GAYTINO! Made in America,” Dan Guerrero’s story about being gay and Chicano; and an exhibition and panel at the West Hollywood Library titled “Where Love is Illegal,” which features portraits by photographer Robin Hammond of people who live in countries where it is illegal to be gay or lesbian.