The city of West Hollywood has installed “Yolki Palki,” an exhibit by Tanya Brodsky, near the West Hollywood Community Center at Plummer Park, 7377 Santa Monica Blvd. 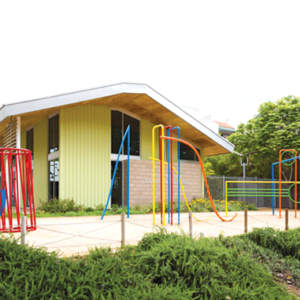 “Yolki Palki” consists of several large-scale sculptures that use playful form and bright colors to evoke a children’s playground similar to those that were ubiquitous during the Soviet era. The sculptures don’t quite work as playground equipment: each one is too tall, too short, missing key elements or is installed at an absurd relationship to the one next to it. The installation’s title, “Yolki Palki,” is a Russian nonsense phrase expressing frustration or alarm, commonly used in lieu of profanity in the presence of children.

Brodsky creates colorful, minimalist and playful artwork using industrial materials and techniques, imbued with humor informed by her Soviet upbringing. The works often incorporate architectural elements, re-imagined in ways that expose and complicate their relationship to the human body, public space and the social conventions that govern them. The display was curated by Aurora Tang.

A free artist and curator conversation will be held on Saturday, May 18, from 4 to 5:30 p.m. in Rooms 5 and 6 at the Community Center. The discussion will be followed by an exhibition walkthrough. RSVPs can be requested by visiting yolkipalki.eventbrite.com.

Brodsky, who was born in Kiev, Ukraine, lives and works in Los Angeles. The installation is part of West Hollywood’s Art on the Outside program.