‘We’re not going back’ 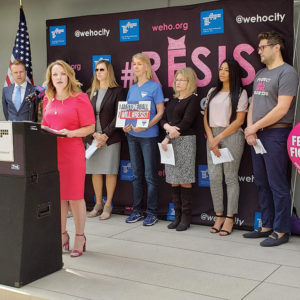 On May 20, the City Council voted unanimously for a resolution that denounces Georgia’s law and suspends official travel to Georgia and any other state that passes similar legislation. The next morning, May 21, West Hollywood Mayor Pro Tempore Lindsey Horvath, Councilwoman Lauren Meister, and several activists and executives from nonprofits and advocacy groups came together at West Hollywood City Hall to denounce the abortion-related legislation.

At an event that joined others around the country in an effort to #StopTheBans, representatives from organizations like the Planned Parenthood Advocacy Project Los Angeles County Action Fund, Black Women for Wellness, National Council of Jewish Women, Los Angeles and the National Women’s Political Caucus came to the rally in West Hollywood, which many speakers identified as the first declared “pro-choice” city in the U.S.

Dozens of women’s rights supporters were also in attendance, many of them wearing clothing and carrying signs bearing feminist and Planned Parenthood-supporting slogans, and others denouncing President Donald Trump and other Republicans.

Several of the speakers stressed the importance of building political support before any of the abortion-related bills and laws come before the U.S. Supreme Court, which could use the cases as a chance to potentially overturn Roe v. Wade, the landmark 1973 decision that legalized abortion nationwide.

Multiple speakers decried the new laws because many of them aim to ban abortion after a fetus develops a heartbeat, which can happen before a woman knows she’s pregnant. Meister laid the blame at the feet of conservatives, who she said will deny women the right to choose while refusing to help the child or mother once the baby has been born.

“The hypocrisy of these ‘Handmaid’s Tale’ politicians is astounding,” she said. “They don’t support affordable health care or birth control or sex education in our schools. They don’t legislate provisions to care for a child whose parents are unable to take care of them emotionally or financially; only that they be born.”

While all of the laws drew scorn, the Alabama legislation was given special attention because it is likely the harshest in the nation. The bill – which was signed into law by Gov. Kay Ivey, a woman – does not allow for exceptions for pregnancies caused by rape or incest, drawing the criticism of liberals and conservatives alike, including Trump. It has also been pointed out that the law was approved by Alabama’s Legislature, which is largely white and male.

“Shame on the men who made that law in Alabama and on the woman who signed it,” Horvath said.

Speakers said they won’t stop until women’s reproductive health is safe from the threat these bills propose. They encouraged local governments, as well as individual voters, to become more vocal and politically involved to ensure the survival of Roe v. Wade.