Waldorf Astoria Beverly Hills has announced the appointment of Drew Clarke as the new director of sales and marketing, bringing a wealth of knowledge and experience to the award-winning property. 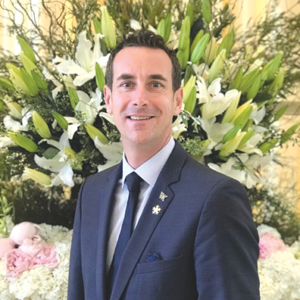 Clarke will oversee the sales and marketing teams, divisions essential to the growth and success of the hotel. He returns to his home state of California with his new position at the Waldorf Astoria Beverly Hills after a career in luxury hospitality at locations around the world. Over the last two decades, he has worked in various capacities including food and beverage, human resources, and sales and marketing at the Four Seasons properties in Santa Barbara and Hualalai. Clarke most recently served as director of sales and marketing at the Four Seasons Hotel Gresham Palace Budapest, helping to advance the growth and reputation of the five-star property.

“We are thrilled to have Drew join our exemplary team in Beverly Hills and know that he will be a tremendous asset in continuing to drive awareness, forge creative partnerships and increase reservations as we enter our third year since opening,” said Vanessa Williams, general manager of Waldorf Astoria Beverly Hills.