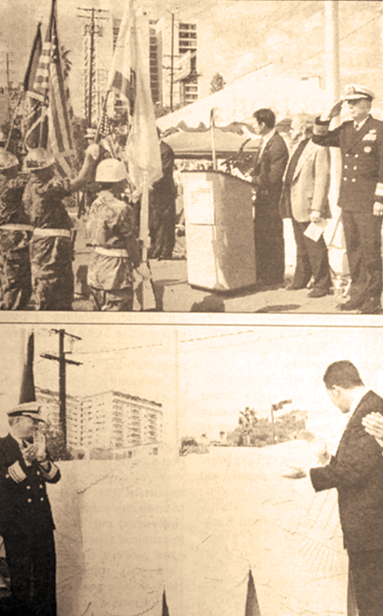 Photographs in the Nov. 13, 2003, issue of the Park Labrea News and Beverly Press showed West Hollywood and U.S. Navy officials at a dedication ceremony for the city’s veterans memorial. In the upper photograph, West Hollywood City Manager Paul Arevalo (at podium) joined the late Councilman Sal Guarriello and U.S. Navy Admiral John Cotton at the ceremony, which also included the New Directions Color Guard. Cotton (left) and West Hollywood Councilman Jeffrey Prang prepared to unveil the memorial in the lower photograph. Guarriello, a World War II veteran who died in 2009, and Prang, who now serves as Los Angeles County Assessor, were instrumental in establishing the city’s veterans memorial, which is located at Santa Monica Boulevard and Holloway Drive. It provides a place for solemn tributes and commemoration of those who have served.

Black-Foxe Military Institute in Hollywood was a highly-regarded school