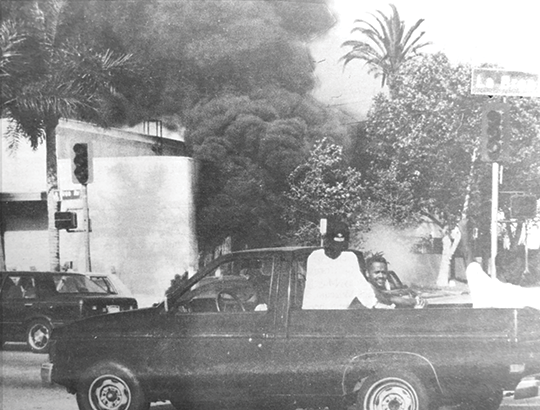 A photograph in the May 7, 1992, issue of the Park Labrea News and Beverly Press showed a fire burning at Goodman Music near La Brea Avenue and Eight Street during the Los Angeles Riots, which started 27 years ago on April 29. The local area was significantly impacted, with multiple fires and looting occurring at stores along La Brea and Melrose avenues, and Beverly Boulevard, according to an accompanying article. Goodman Music and a former Samy’s Camera store on Beverly Boulevard were destroyed by fires. National Guard troops were deployed to many locations in the community to help restore order. More than 60 people died citywide during the five-day period of civil unrest, and property damage was tallied at approximately $1 billion.