When the first “Star Wars” prequel and “The Matrix” premiered in 1999, each vied for the coveted role of a generation’s favorite franchise. “Star Wars” had it before, but was dead on arrival, while Neo’s battle against A.I. fizzled out by the first sequel. In 2000, however, “The Lord of the Rings” arrived, contributing the rare perfect trilogy. 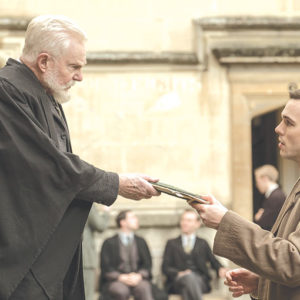 Thank Peter Jackson for some masterful filmmaking, but pay eternal homage to J.R.R. Tolkien for constructing one of the most engrossing narrative universes, complete with dragons, goblins and languages all created by the Oxford-trained philologist himself, played here by Nicholas Hoult (young Beast in the “X-Men” films). He’s an amazing man and the perfect subject for a biopic. So maybe we’ll get one that matches his literary worth one day, “but today is not that day,” to borrow the dramatic words of Aragorn.

Frankly, “Tolkien” can’t decide what it wants to be: a romance story, social issue film about class struggles, a buddy flick, a war story. They all make an appearance in watchable but mostly forgettable ways, all packaged far too neatly to be true and too generically to feel human. As for Tolkien’s Catholicism, that system of beliefs that prompted the Christian conversion of his colleague C.S. Lewis, it only appears in the form of a rigid priest, Father Francis (Colm Meaney, forever Chief O’Brien from a couple “Star Treks”), charged with Tolkien’s care until he turns 21.

Solid casting and unique marketing don’t deliver on the promise of an epic adventure or even an original one. I’m just gonna say it: biopics are normally insufferable. Wretched pacing, no real plot, melodrama overly used at the expense of historical accuracy. The notion that everything must be 100 percent accurate is impossible. That’s Ken Burns’ job.

Instead, an authentic experience must replace those factual revisions. “Raging Bull,” “Selma,” even “Lincoln” – despite its tonally unnecessary ending – understood this. But “Tolkien” meanders through a kinda nonlinear retelling of his youth and trauma during World War I, never establishing an original angle.

Throughout, young Tolkien discusses fascinating topics: the aesthetics of language, lore and poetry. In the hands of a dramatic screenwriter like Aaron Sorkin the content would inspire a new generation of students to enroll in the humanities. But screenwriters David Gleeson and Stephen Beresford, a pair of relative newcomers, fold under the pressure of Tolkien’s greatness, relying on tropes more than any writer should, especially any writers depicting such an original voice. 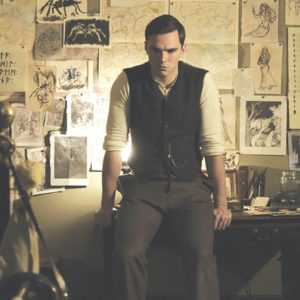 Nicholas Hoult portrays J.R.R. Tolkien in a film that fails to capture the imagination, unlike the author’s literary works. (photo courtesy of Fox Searchlight)

For example, rather than trust that linguistics is actually an interesting subject worthy of layering throughout the film, they namedrop heady topics free of jargon (a sin by itself), making everything an analogy for some deeper meaning in Tolkien’s life. The result: vague language more suited for a pyramid scheme recruitment cassette.

Even worse, the screenwriters and director Dome Karukoski hint at a more compelling approach. Dancing between timelines, Tolkien imagines a fire-breathing dragon, which transforms into German soldiers with flamethrowers attacking. It’s easily the best moment in the film, the most pointed example of art and life converging. Never again. Rather than make this a consistent element of the film, it’s a one-off. That should’ve been the golden goose, the film’s original angle, not the majority of the special effects budget.

As for J.R.R.’s great romance, Edith Bratt (Lily Collins) is a free thinker stuck at home, unable to express her love for music with anyone because of women’s limited mobility in early 20th century England. Alas, following a single exchange revealing her struggle, she and the social prejudices stacked against her transition to the background while another underdeveloped theme takes center stage.

Such winks should be chilling, but it all plays like a cheap “Dead Poets Society.” “Tolkien” aspires to promote bravery in life, love and career. If only the filmmakers here emulated what he stood for.