A 30-year-old man was arrested on May 5 and faces felony hit-and-run charges for a collision that seriously injured a photographer crossing Vine Street north of Hollywood Boulevard on Nov. 6. 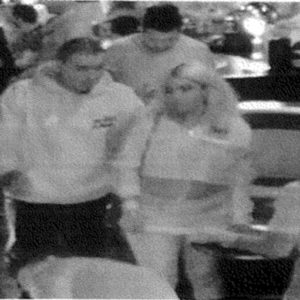 Police released a security camera image of the alleged suspect wanted for a hit-and-run on Vine Street shortly after the collision last November. (photo by Edwin Folven)

The suspect, Elvis Orlando Guevara, is being held without bail at the Los Angeles County Sheriff’s Department’s North County Correctional Facility. He was arrested at an undisclosed location in Van Nuys for an unrelated collision and domestic violence incident.

Investigators had been searching for the suspect for months after identifying Guevara through security camera footage and witness accounts, said Det. Olin Osborne, with the Los Angeles Police Department’s West Traffic Division. His whereabouts were unknown until officers in Van Nuys made the arrest on May 5 and learned Guevara had an outstanding warrant for hit-and-run.

“Detectives had a suspicion about who was involved, and later more information surfaced that led to Guevara,” Osborne said. “A warrant was issued and when he got picked up in the Valley for domestic violence, he was subsequently arrested.”

Guevara was allegedly driving an Acura sedan that collided with Corentin Villemeur at approximately 11:25 p.m. on Nov. 6 as he was walking in a crosswalk in front of the Avalon nightclub. Villemeur, a French national who lives in Hollywood, had been at the Avalon prior to the collision.

Detectives determined the driver had also been at the concert with a female companion and based on witness statements, determined he had been involved in a domestic violence incident outside the nightclub that night. Though surveillance camera footage and witness accounts, police identified the vehicle he was driving. A witness also chased the vehicle for a short distance as it drove away south on Vine Street.

Although police had a license plate number, the vehicle was allegedly sold multiple times before it was found and detectives were unable to locate the driver. The investigation determined that the vehicle had allegedly been driven by Guevara on the night of the collision.

Villemeur sustained broken bones and a head injury, and is still recovering. Osborne said Guevara has previously been arrested for domestic violence-related charges.

“We were confident we would find him,” Osborne added. “It was a matter of time.”